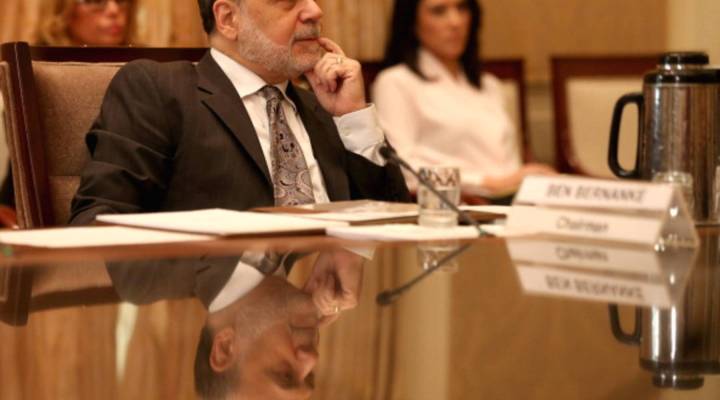 Tapering our own economic expectations

COPY
Federal Reserve Board Chairman Ben Bernanke participates in a meeting of the Board of Governors at the Federal Reserve, October 24, 2013 in Washington DC. Mark Wilson/Getty Images

Tapering our own economic expectations

Federal Reserve Board Chairman Ben Bernanke participates in a meeting of the Board of Governors at the Federal Reserve, October 24, 2013 in Washington DC. Mark Wilson/Getty Images
Listen Now

It’s official, the Federal Reserve is going to keep the milk and honey flowing — well, the cash anyway. The Fed said today that the economy still needs support — support that comes from the mammoth bond buying program known as Quantitative Easing.

The more bonds the Fed buys, the more cash flows through the economy. So, when the Fed said a few months ago that it might put the brakes on those purchases, it caused quite a stir.

But now the government shutdown and the dismal job market have the Fed feeling less confident about the economy’s ability to stand on its own, and therefore less willing to taper off the program.

“Timing is important here,” says Bill Stone, chief investment officer at PNC Wealth Management. “You don’t want to take those purchases away too soon, if you don’t think the economy will continue to grow without them.”

And that’s put the Fed in a kind of Goldilocks conundrum.

“If we go a little too soon, then maybe the economy isn’t ready and it causes growth to be slower and unemployment to be higher,” says Michael Hanson, senior economist at Bank of America, Merrill Lynch. “But if we go a little bit too late, there’s various risks around the possibility of inflation picking up or maybe bubbles in financial markets.”

Fed chief Ben Bernanke’s academic background likely means the stimulus will taper off later rather than sooner. “Ben Bernanke is a student of the Great Depression,” says Keith Davis, an economist with Farr Miller and Washington. “In the Great Depression, it’s widely known that we removed the stimulus too quick, which caused us to go back into a pretty deep recession.”

Still, says Davis, keeping the stimulus in place too long and holding interest rates low can cause other problems. “As long as interest rates stay low, people will continue to pull money out of fixed income assets and put it into riskier assets like stocks,” he says.

And, says Davis, low interest rates and people moving into riskier investments to get returns is exactly how we got into this economic situation in the first place.