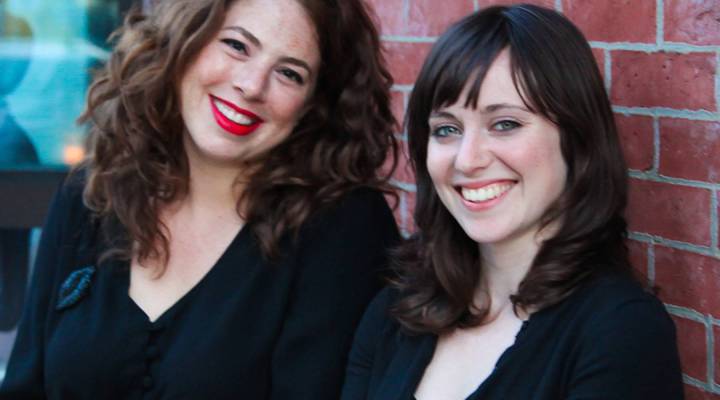 COPY
Allison Kave and Keavy Blueher, owners of Butter & Scotch, which is 2 weeks into a Kickstarter campaign, intended to raise $50,000 to open a cocktail bar/pastry shop in Brooklyn.

Allison Kave and Keavy Blueher, owners of Butter & Scotch, which is 2 weeks into a Kickstarter campaign, intended to raise $50,000 to open a cocktail bar/pastry shop in Brooklyn.
Listen Now

“We launched our Kickstarter campaign about 2 weeks ago,” says Kave. So far, Butter & Scotch has raised $28,000 and Kave says she can’t believe how many people have given. “As of now, and I check it, like, every 2 seconds, we’re at 300, which is just incredible.”

In return for a pledge, those 300 investors don’t get shares, they get stuff: tote bags, pastries, or a free party, depending on the amount they pledge. Some companies want to use this crowdfunding method to sell shares — basically opening up venture capital to the rest of us.

When you think of venture capitalists, you probably think of really wealthy business tycoon-types. But today, regulators introduced new rules that would allow start-up companies to pool micro-investments from people around the country.

Up until now, there have been strict rules governing who can buy stock in private companies: “What we’ve historically said is you have to have the guidance and supervision of a professional” says Max Wolff, chief economist for ZT Wealth, “and you have to be a person of well above average means to participate in the opportunities here.”

With a handful of exceptions, only investors with a net worth of more than $1 million dollars could be venture capitalists, investing in private companies at an early stage.

Wolff says that’s made it hard for start-ups to get financing, especially since the financial crash, which is part of why companies have been pushing to relax the rules.

“Today’s ruling democratizes the investment process, certainly,” says Colin Blaydon, director of The Tuck Center for Private Equity and Entrepreneurship at Dartmouth. Blaydon says the number of start-ups that actually pay off for investors is tiny and relaxing these investment rules could backfire.

“Often the investors in these companies are less able to discern between good investments and bad,” he says. Also, these investors won’t get the same information they’d get from a company that had gone public and was selling shares on the stock market, so investing in them — even with a crowd — will be a lot riskier.

Still, there’s a limit to the losses nouveau-venture capitalists will lose. The law caps the amount that people can invest in these new companies: Most investors would only be allowed to invest around 5% of their annual income every year.