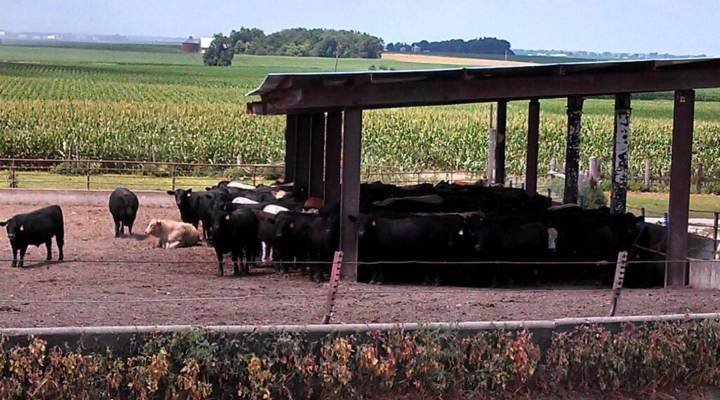 COPY
A photo of cattle taken by farmer Ben Albright and posted to his Twitter account. @ben_albright/Twitter

A photo of cattle taken by farmer Ben Albright and posted to his Twitter account. @ben_albright/Twitter
Listen Now

On his farm in Lytton, Iowa, Ben Albright fires up his giant, green grain harvester. He spends hours in this machine during harvest season, steering through long rows of corn, listening to talk radio and tweeting.

“Here I have posted a picture of some of the drought conditions we’ve experienced this summer,” says Albright. “Like here, I’ve got a picture of a tape measure that’s in the ground 9 inches, in a crack.”

Albright says a lot of farmers are using social media now for one big reason: They’re worried about the industry’s reputation. Films like “Food, Inc.” and “Fast Food Nation” have farmers feeling like they have to defend themselves. “It’s really made sense to me to get our  story out there to the consumers,” says Albright. “They want to know how their food’s grown and the people who are producing it.”

Social media gives farmers a chance to connect with consumers and with each other. “Farming can be a lonely business,” says Michele Payn-Knoper, a dairy farmer and the founder of AgChat. It hosts a discussion on Twitter every Tuesday night, using the Twitter hashtag #agchat, which includes thousands of farmers, foodies and chefs from all over the world. “It’s really about empowering a connected community of ag-vocates, as we like to say,” says Payn-Knoper.

Social media also has practical business value for farmers says Drake Larsen, communications and policy associate at Practical Farmers of Iowa—it runs programs that teach farmers social media. “Social media is great at helping to build community among farmers,” says Larsen. “That can lead to all sorts of things, whether it’s just moral support or problem solving or tracking trends.”

Last year, Practical Farmers of Iowa noticed a lot of members complaining on Twitter that their garlic crops were ruined. It got plant samples from the farmers, sent them to a lab, and was able to conclude that a bug, called a leaf-hopper, was the culprit.

“I posted some harvest pictures a few weeks back and I got some people in Germany that were commenting on them on Twitter, so I thought that was farily interesting.”