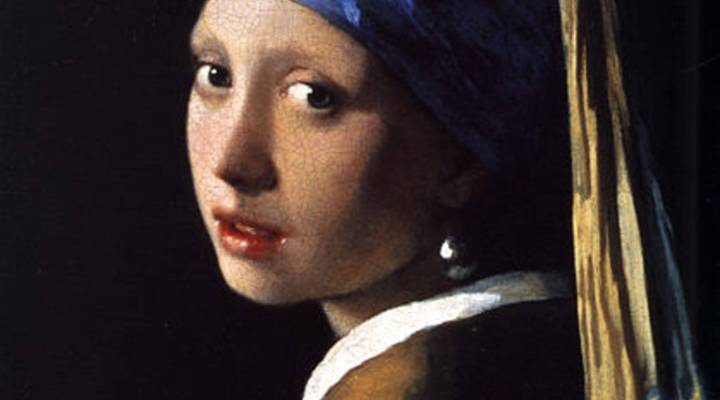 Forget the movie, the Girl with a Pearl Earring is a blockbuster painting

COPY
Johannes Vermeer's The Girl With The Pearl Earring

Forget the movie, the Girl with a Pearl Earring is a blockbuster painting

Johannes Vermeer's The Girl With The Pearl Earring
Listen Now

“The Girl With a Pearl Earring” has criss-crossed the country in recent months, as part of a traveling exhibition on loan from the Mauritshius Royal Picture Gallery in the Hague. Together with other Dutch masterpieces, the Girl has been seen by museum-goers in San Fransisco, Atlanta, and now, New York. As with any exhibit, matters of logistics are hammered out far in advance.

“You work, years out, with the lending institution to decide on protocols, guarding, transportation, accompanying couriers, accompanying security,” says Colin B. Bailey, director of San Fransisco’s Fine Arts Museums. “Often the institution will want to be very clear on how you are going to hang the work, what hardware you use, what lighting you use.”

The Frick Collection is showcasing the exhibition in New York, and just finding space for the show was one of the biggest challenges. The Frick lacks the square footage of many museums; it was built as a gilded-age mansion in 1913. Curators, though, know Vermeer’s Girl will draw huge crowds.

The painting has a “place of pride,” says curator Margaret Iacono. “She is in a gallery by herself in our Oval Room.” The Frick differs from other institutions in another way that has to do more with its bottom line. As popular as the Dutch masters exhibition is expected to be, there will be no additional charge for tickets beyond the $20 for admission that adults normally pay. Iacono hopes the popularity of the upcoming exhibit will alert visitors to the treasures in the Frick’s permanent collection.

“We want to be as accessible to the public as possible,” Iacono says.

“If the “Girl with a Pearl Earring, which is one of the most beguiling and enigmatic pictures in the western canon — if that brings you to the museum, my hope is that the experience will be so positive that you will enjoy the pictures in the permanent collections,” Bailey says.