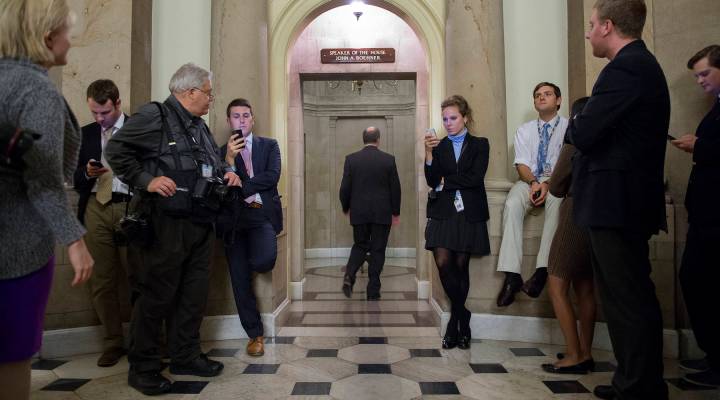 What does all of this talk about default really mean?

COPY
Reporters stand outside the Speaker of the House's office on Capitol Hill in Washington, DC, October 15, 2013, waiting for comments from the Republican leadership. JIM WATSON/AFP/Getty Images
Raising the Debt Ceiling

What does all of this talk about default really mean?

Reporters stand outside the Speaker of the House's office on Capitol Hill in Washington, DC, October 15, 2013, waiting for comments from the Republican leadership. JIM WATSON/AFP/Getty Images
Listen Now

If you’ve been following reports about the debt ceiling, you’ve probably heard the word “default” being bandied about quite a bit. While the U.S. could indeed be headed for a default, Marketplace senior editor Paddy Hirsch says it’s a term that’s being “brutally abused” by the media.

“You hear the word ‘default’ used to describes government’s potential failure to pay government employees, to make scheduled payments to contractors, to actually fail to raise the debt ceiling itself — these are all kind of termed as defaults,” says Hirsch. “They are defaults in a general sense, but they’re not defaults in the way that people on Wall Street regard as that technical sense that could potentially destroy the financial system and the economy.”

For a full explanation of what a default by the federal government is, and how it could wreak havoc on the world economy, click the audio player above.