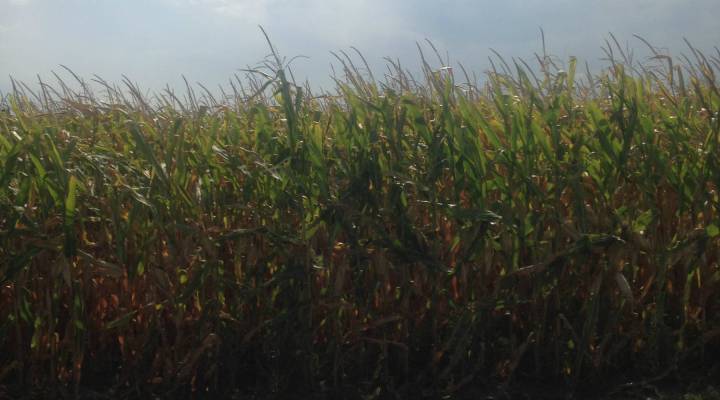 Last year, the price of corn hit a record high — more than $8.00 a bushel, after years of being around $2 dollars a bushel. For Iowa, the country’s top corn producing state, that meant economic boom time.

“It’s made a big difference for farmers, I think it’s awesome,” says Sandra Harris, owner of a B&B in Creston Iowa. She’s cooking sausage patties for her guests — all of her rooms were filled last night and she says business, in general, is brisk right now. She says high food prices have changed the local economy and the landscape. “In driving the country, to me it’s exciting to see new houses go up. It’s directly related to the price of corn and beans.”

Higher food prices pushed demand for farmland way up. Iowa’s ultra-productive land is now the most expensive in the country — as much as $22,000 an acre. That prosperity has meant boom-time for many small towns in Iowa that had seen population drain for years. “When the economy’s good, people hang around more,” says Mike Duffy, an economist at Iowa State University.

The town of Hull, Iowa (which is in the heart of Iowa’s most expensive land, in the Northwest corner of the state) had so many people hanging around, it didn’t have enough space for all of them. The town bought $1.5 million worth of land a couple of years ago — that’s a lot of cash for a town of around 2,200.

“There were a few eyebrows raised,” laughs Aaron Kooiker, city administrator for Hull. “A lot of the folks that are a part of our economic development in town were really having a heart attack when it came to paying that much. Well, it turned out it was a pretty good deal.” Hull used part of the land to create 90 housing lots. It’s sold most of them and those that haven’t sold are still making money for the city, being rented out to farmers for crops.

He drives me to the housing developments on the edge of town. New ranch-style houses stand on small plots of land. Between many of the homes, crops are growing. “As you can see, we’ve got residential lots like anywhere else, but in some of our residential lots, we’re growing beans,” says Kooiker. When land is $22,000 an acre, you don’t waste it.

But Iowa’s prosperity may be at a turning point: The price of corn is roughly half of what it was last year and land prices are expected to drop by as much as 20 percent over the next few years. For now, though, things are still thriving. Hull’s Aaron Kooiker says the town has a brand new library, new schools, a new senior center and it just bought more land for business development. He drives me to the acreage at the edge of town.

“This is what we’re going by now is our new industrial park and you can see corn on it.”