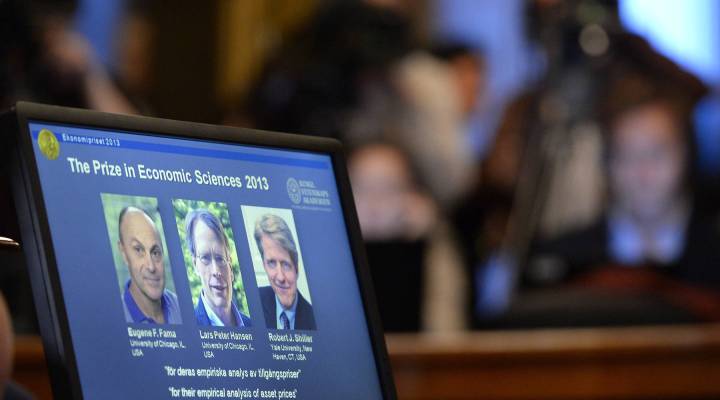 And the Nobel goes to: Rationality (and irrationality)

COPY
Portraits of US trio Eugene F Fama, Lars Peter Hansen and Robert J Shiller, who won jointly the Nobel Prize in Economic Sciences 2013, is seen on a computer screen at the Royal Swedish Academy of Sciences, in Stockholm, on October 14, 2013. JONATHAN NACKSTRAND/AFP/Getty Images

And the Nobel goes to: Rationality (and irrationality)

Portraits of US trio Eugene F Fama, Lars Peter Hansen and Robert J Shiller, who won jointly the Nobel Prize in Economic Sciences 2013, is seen on a computer screen at the Royal Swedish Academy of Sciences, in Stockholm, on October 14, 2013. JONATHAN NACKSTRAND/AFP/Getty Images
Listen Now

What’s in a price? That was the question that bagged the Nobel Prize in Economics this morning. Three American economists took home the award: Robert Shiller, an economist at Yale, and Eugene Fama and Lars Peter Hansen, both economists at the University of Chicago, all got the Nobel for their work on asset prices: Why we pay what we pay for everything from a share of Facebook stock to a ranch-style home with a 2-car garage.

Kedrosky says price has only gotten more important as financial markets have created all kinds of products around the prices of things, for example, mortgage backed securities — the now-infamous financial products tied to mortgage loans.

“Once you start doing that, you create all of these new correlations and new combinations,” he explains.

When housing prices crashed, many mortgage-backed securities became worthless and because these products had been sold all over the world, suddenly, the price of a house in Tucson, Ariz., was of critical importance to the Italian economy.

“Those assets get traded all over the world and there are a lot of financial derivatives linked to those real goods and services,” says economist Matthew Slaughter, Associate Dean for Faculty at Dartmouth’s Tuck School of Business.

Slaughter says price is why the world is watching Congress now, hoping it will pass a budget. If not, he says, the U.S. could default on its debts, affecting the price of the all-important Treasury bond.

“In many ways, in the world economy today, the single most import asset are U.S. treasury securities,” says Slaughter.

Treasury bonds have been seen as being totally safe and investors, companies and countries all over the world have bought billions worth of them as a way to guard against risk. If the U.S. defaults on its debts, says Slaughter, the value of those assets would come into question.

New Nobel winner Robert Shiller doesn’t think it would come to that. At a press conference at Yale University today, he said he thought Congress would work it out.

“It should be okay,” Shiller says. “I should add, however, that I do not know the future, and could be wrong.”