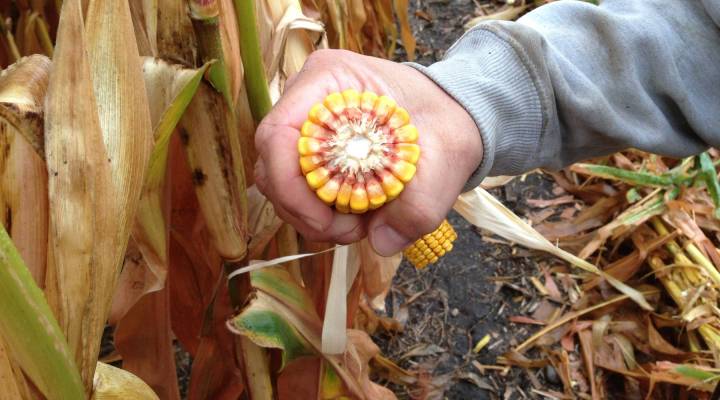 Farmer Harwin Te Slaa is harvesting corn in a giant, Kelly green chopper. He carefully steers it through long rows of corn, while its monstrous, triangular blades pull the cornstalks up by their roots and shred them into cattle feed. It’s been a profitable few years for farmers like Te Slaa — record corn prices have pushed land prices up. Sioux County, where Te Slaa has been farming his whole life, is now home to the most expensive farmland in the country: $22,000 an acre in some areas. Iowa land prices have risen 80 percent in the last few years.

There’s no way you can justify probably not even half the value of the land right now,” says Te Slaa. Despite those high prices, demand is still high. Generally, the land is already gone before anyone has an idea that something could be available,” says Te Slaa. “On three different farms that I bid against in the last year and a half, two have made the New York Times.”

Land deals around here have been making national news and attracting investors from Silicon Valley and Wall Street. Te Slaa has had visitors from as far away as Egypt come to check out this famous dirt.

“We’re the best land in the world,” asserts Mike Duffy, an economist at Iowa State Univerity. “The land is worth so much because of what it can do.” Namely, grow just about anything. Most years, there’s plenty of rain and centuries of prairie grasses have created black topsoil that runs hundreds of feet deep and can support demanding crops like corn.

And corn prices have been on a tear, they topped $8 a bushel last year after years of selling for around $2. The change started with the Energy Act in 2007, which created a large demand for corn-based ethanol, then a growing middle class in China and India created a demand for more corn-fed beef and pork. The effect? The top third of Iowa’s farmers are pulling in around $300,000 a year. That kind of money was unheard of when Jason Smith was growing up. “We always thought of farmers as poor people and they were,” says Smith. “There was difficult times back then. Today, there are a lot of new houses in the countryside. If you drive around the countryside, you see a lot of new combines, you see a lot of new tractors.”

All of that is very good news for Smith. His company, DreamDirt, auctions off farmland and farm equipment. At the fairgrounds in the tiny town of Lenox, Iowa, combines, horse trailers and tractors are lined up on the grassy expanse. Smith and his crew drive from item to item in an RV, calling prices out of a bullhorn, while a group of around 100 farmers follows along. Prices for farm equipment like this have skyrocketed. A new combine, complete with touch screen technology, can cost half a million dollars. ” People joke about their sports cars,” says Smith “and then a farmer drives by in a combine and the farmer’s combine is worth five or six times what that fancy sports car was.”

The farming economy run up could be winding down. The price of corn is at a three year low, the economies of China and India are flagging and major corn-growing competition has cropped up in places like Africa. ” As corn prices settle back down, we’re going to see land values fall off,” says Duffy. “It’s going to be more of a deflating, though, than a bubble bursting.”

Iowa farmland is expected to lose as much as 20 percent of its value in the next few years. DreamDirt’s Smith has already noticed less demand from outside investors, but demand from local farmers is still strong. Smith expects to sell $100 million worth of land in the next year. He says this land is incredibly rich and productive and there’s only so much of it for sale.

Addressing the farmers through his bullhorn, Smith sums it up: “If you have any farmland you’re interested in selling, we love it all, let us know. We just love dirt.”