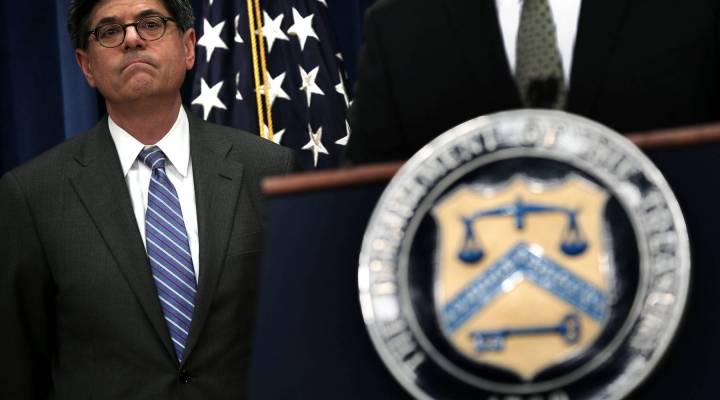 COPY
U.S. Treasury Secretary Jack Lew has informed Congress that the government will exhaust its borrowing authority by October 17, after which it could default on its loans. Alex Wong/Getty Images
Raising the Debt Ceiling

U.S. Treasury Secretary Jack Lew has informed Congress that the government will exhaust its borrowing authority by October 17, after which it could default on its loans. Alex Wong/Getty Images
Listen Now

Although investors are worried about the government’s current shutdown, there’s greater concern about the debt ceiling — the $16.7 trillion dollar limit on how much the U.S. government can borrow. If the limit isn’t raised by October 17th, it could create a potential economic disaster.

Marketplace’s Paddy Hirsch says while we often think of our debt as owed to foreign countries, America owes a lot of money to sources closer to home — namely ourselves. Large institutions, individual investors, social security — are all big buyers of U.S. bonds. But even regular Americans indirectly own a large chunk of our national debt — through their 401(k) plans, retirement accounts, etc. They’re buying U.S. bonds, which is lending money to the government.

“So in actual fact, we are lending money to ourselves and we’re actually borrowing money from ourselves,” he says.

Hirsch says if we default on our debt, we won’t be able to pay the interest on the money that we already owe. If the government doesn’t raise the debt ceiling, borrowing costs will go up, and as a result Americans would have to spend a lot less.

“And that means we’ll have to shrink government to a really, really small size,” he says. “We’d be laying off millions of people who are employed by the government right now, which would sent unemployment through the roof, and then we’d risk a really serious depression.”

How a debt jubilee could help the U.S. avert economic depression