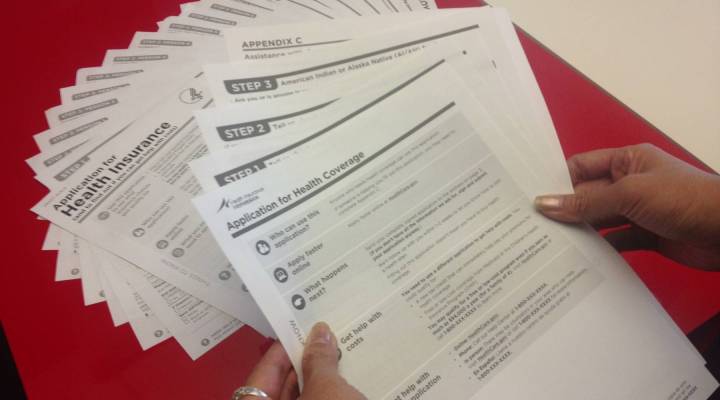 The application form to apply for Obama's Health Care plan went from 21 pages to 3. Marketplace

And we got our first real look at the health-insurance exchanges, the online marketplaces where individuals and small businesses can buy insurance. The exchanges, one of the components of the Affordable Care Act, opened on schedule. But the were paralyzed almost instantly by  heavy traffic and widespread computer glitches. Millions of people attempted to access the exchanges, but very few got through.

Marketplace has done a lot of reporting on the exchanges in the past few months. We’ve compiled some of the best reporting — and other links — to help guide people through the process.

This is the main site to enter the federally operated insurance exchanges. It includes a handy glossary of all the terms you’ll need to know.

2. Am I eligible for subsidies, and where can I sign up?

Most states have hired advisors, known as navigators,  to help consumers navigate the health-care maze. But, there are also several sites to guide you thru the process.

Each state has it’s own exchange, more than 30 of which are operated — at least in part — by the federal government. The rest are operated by the states themselves. You can look up the link to your state’s page at federal site. Some of the big individual state exchanges are:

3. How much will insurance cost on the exchanges?

A recent report from the Department of Health and Human Services uses the example of a healthy 27-year-old. He or she would pay $163 a month, on average, for the basic ‘bronze’ plan and $240 a month for ‘gold’ coverage, the most comprehensive plan.  President Obama said in a speech yesterday that those rates were ‘less than the cost of your cell phone bill.’

JB Silvers is a professor of Healthcare Finance at Case Western Reserve’s Weatherhead School of Management.  He says he’s impressed by the rates.

“I’m actually surprised they’re coming in so well. They’re very competitive and they definitely will save consumers money,” he says.

Some other issues related to cost involve who actually will sign up: For instance, will healthy, young consumers sign up? Healthy folks help keep costs down for the entire system. (That’s how insurance works!)

And remember, like all health insurance, the Obamacare premiums don’t take into account all costs, as it relates to health care.

Another tough question to answer. Computer glitches and tech problems on the federal exchanges have been epic. Administration officials are working on the problems, but they could last for weeks. Plus, remember the deadlines are rolling.

Here are the important dates to know as the health care roll-out begins: