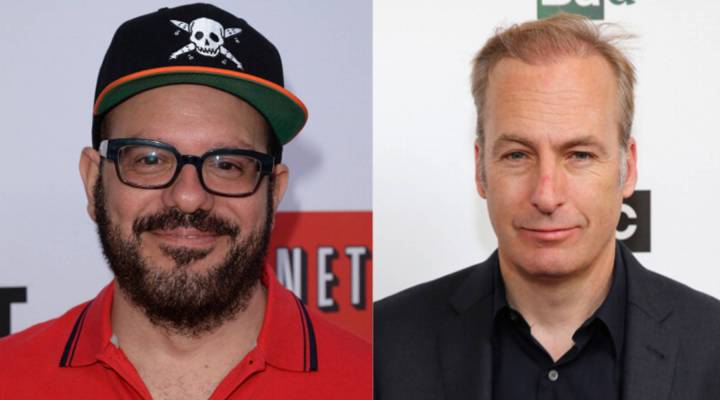 The inside scoop on ‘Breaking Bad,’ ‘Arrested Development’

The inside scoop on ‘Breaking Bad,’ ‘Arrested Development’

Today on the show, Kai Ryssdal sits down with “Breaking Bad” actor Bob Odenkirk and “Arrested Development”‘s David Cross to talk about a new book they’ve written together: “Hollywood Said No!”  Odenkirk and Cross first teamed up way back in history — we’re talking pre-iPod and DVR here people — on the HBO sketch comedy series “Mr. Show.” Their new book is made up of a number of sketch scripts written back then that didn’t quite make it to the big screen. Or the little one.

But while they each have extensive resumes (writing for a little show called “Saturday Night Live,” among others), both are in the spotlight now for very different projects.

All those “Breaking Bad” fans out there — and there are many in public radio land — will know Odenkirk plays lawyer Saul Goodman on the show As the latest season wraps up, there’s been rampant rumors of a spin-off show. Kai dug up the dirt:

Breaking Bad isn’t the only show that made headlines over the summer. There was just as much, or even more excitement over Arrested Development, which stars a dazzling David Cross as the hapless Tobias Funke. We can thank Netflix for resuscitating the show, and a few months back, we asked Netflix’s chief content officer whether he’d make all our dreams come true and release another season of the cult hit. Cross is with us on this one:

Listen to the full interview with Cross and Odenkirk about failures in the entertainment industry, covered in their new book, “Hollywood said No!”