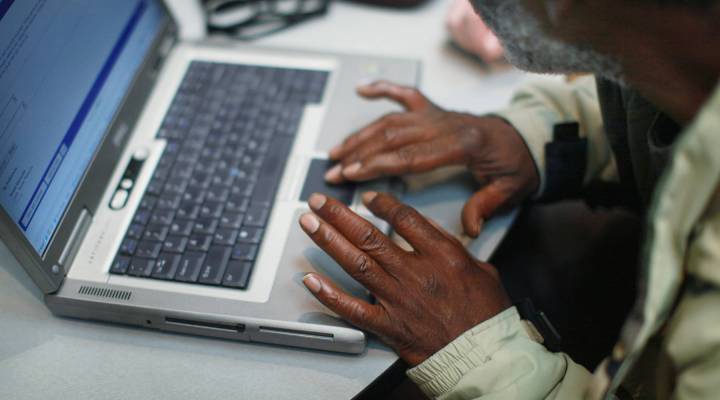 COPY
Fifteen percent of Americans don't use the internet at all. Scott Olson/Getty Images

Fifteen percent of Americans don't use the internet at all. Scott Olson/Getty Images
Listen Now

On a recent Monday evening, a computer literacy class at the Benjamin Franklin branch of the Los Angeles public library was packed with a dozen adults, some of whom were getting online for the first time in their lives.

“In [this] community, there usually isn’t computer access or internet access at home,” said librarian Mari Jack. She, along with computer aide Martha Flores, who translates the lesson into Spanish, are focusing today on how to download free music and movies using library resources.

At times, the students struggle. Alfonso Rodriguez, 62, can’t remember the last four digits of his old phone number. They serve as the PIN to his library account and without them, he can’t log in. Flores advises him to check at the main desk and he darts out to avoid missing too much of the lesson.

Rodriguez, who works for the Los Angeles Unified School District, says he has recently begun using a computer in his workplace for the first time in his life. He’s a food service worker and he has to keep records of the number of children who buy lunch at school. He discovered the internet a few years ago. He says he’s enthralled by the way it allows him to research any topic that catches his interest.

“I just go to Google, and pick a topic and put it in, and I’m off,” Rodriguez said. He has his own laptop, but can’t afford to pay for internet access at home, so he comes to the library or goes to McDonald’s to use the wifi.

Many in the class recognize that computer literacy is necessary for anyone hoping to get — or keep — a job.

Joanne Mestaz, who has been unemployed for several years and cannot afford to buy a home computer, started coming to the library so her son could do his homework. She quickly realized that free computer classes could benefit her. Mestaz graduated from college in 1993, when knowing how to use a word processor was enough and computer literacy was considered extra.

“I do wish I would have tried to learn,” Mestaz said. “I do feel behind. I know that [computer literacy] is a factor in the job market.”

Data from the Pew Research Center’s report, Home Broadband 2013, would suggest that low-income, predominantly-Hispanic Boyle Heights, is exactly the kind of neighborhood where computer illiteracy might be prevalent.

“Adults that don’t have broadband at home tend to be older or have lower levels of education,” said Pew researcher Kathryn Zickuhr. “[They have] lower levels of household income.”

The librarians at Benjamin Franklin say that on an average day, the library is packed with people using the computers to look for work — or learning to use the computers for the same purpose.

“Knowing how to type on a keyboard and use a mouse is now becoming a survival skill,” said Senior Librarian Alicia Moguel. She remembers one man who was trying to find a job as a cook. He learned, in a computer class, how to write a resume, but then forgot how to open the file.

“I was able to open his resume and he’s like ‘Oh, thank God. I have to go to an interview,'” Moguel said. “And sure enough, he found a job in Long Beach and we rarely see him anymore. But that’s a good thing because he needed to work. He needed to get a job.”