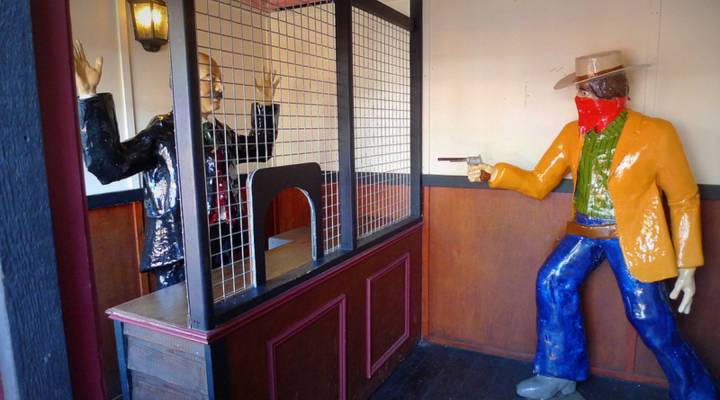 Whatever happened to a good old fashioned bank robbery?

Whatever happened to a good old fashioned bank robbery?

We hear a lot these days about cyber crime — online hackers who get hold of credit card numbers and bank accounts, then use our identities to splurge. But whatever happened to good old fashioned stick ‘em up bank robberies?

Turns out, they’ve on the decline. The number of bank robberies has dropped from around 8,000 in 1990 to just over 5,000 last year, says retired FBI agent Jeff Lanza.

“There’s still a huge number of bank robberies, any way you look at it,” he says.

Lanza points out that every day the banks open, about 20 get robbed. Still, he says, most bank robberies aren’t the dramatic branch takeovers favored by Hollywood screenwriters.

That’s pretty much how things went down when Ted Nellis robbed his first bank. He was 19 at the time and was hustling pool. He’s just gone broke.

“I said to a gentleman, half-jokingly, why don’t we just rob a bank? And he said sure. Let’s do it,” Nellis recalls.

The two men robbed a bank in Calgary, Canada, strolled out into the street crowd and, 10 minutes later, boarded a bus out of town. Nellis says it was thrilling at the time.

“This was just incredible, that I could do this and pull it off so easily and make a fairly decent chuck of change in 30 seconds to 60 seconds work.”

Nellis and his partner each bagged about $4,000 and they beat the odds by getting away. About 70 percent of bank robbers get caught the first time. Those who don’t almost always go back for more.

“We blew a lot of money partying and whatnot,” Nellis says. “We were broke again in about 10 weeks and began looking for another bank.”

Nellis and his partner picked the bank that Nellis’ parents used and hid out in their home after the robbery. But Nellis’ mom returned early from work, saw the men and the cash, and ran outside to tell the police. Nellis was sentenced to five years in prison.

That was back in the ’70s. These days, robbing banks has kind of gone out of style, says the FBI’s Jeff Lanza.

“The ones that are taking place now are a crime for the less skilled, who are not smart enough to commit indentity theft or file false tax returns,” he says.

Criminals take in about $2 billion a year in check and debit fraud. Bank robberies only net around $30 million. The traditional bank robbery is also a lot riskier. Bank robbers are prone to making mistakes, like leaving fingerprints or bragging about the crime.

“A lot of them, after a while, they’ll want to start bragging,” says Sheriff Dale Radcliff of York County, Nebraska.

A bank robber Radcliff was tracking last year, actually posted a video of herself on YouTube, holding up a written note that she’d just robbed a bank and waving around a stack of $6,000 in cash.

“We got a call that this girl had posted pictures of herself with the money and put a video of her out on the web,” says Radcliff. “That made our job real easy.”

Ted Nellis told his story in a memoir: “Journey to Redemption: Small-time Pool Hustler, Convicted Bank Robber, Born Again Christian.” Since leaving prison more than 30 years ago, Nellis has started a successful cleaning business and works as a licensed minister and public speaker.

He says it’s hard to think back on his criminal days, though the skills do still come in handy.

“If I can walk into a bank and rob it in broad daylight, I can stand in front of a group of people and talk,” he says.

Nellis also says he’s grateful his mom turned him in.