The defund Obamacare tour kicks off

The defund Obamacare tour kicks off

Conservatives kick off a nine-city town-hall tour to try to “defund Obamacare,” as they put it, yet again this week. Republican Senator Ted Cruz of Texas and Heritage Foundation president Jim DeMint will be emceeing the road trip, which will hit in succession Fayetteville, Dallas, Tampa, Nashville, Birmingham, Indianapolis, Columbus, Pittsburgh, and Wilmington.

The goal is to galvanize Tea Party supporters and the GOP’s conservative base, to in turn put pressure on hesitant Republican senators and representatives, who are wary of using the threat of a government shut-down to try to sink health care reform.

“This is where the rubber meets the road,” Sen. Cruz said in a speech on August 7 announcing the new strategy for opponents of the Affordable Care Act. “The next 60 days, the decision will be made whether or not we continue to fund Obamacare.”

The attempt at defunding this time around involves the entire federal budget. Cruz has told fellow Republicans that they have until September 30 to achieve their goal. That’s the deadline for Congress to pass a continuing resolution on the budget, or shut the government down. Cruz has urged his colleagues: continue funding everything in the federal budget to run the government — except anything that implements health care reform.

That will be tough to do, both legally and administratively, says primary-care physician Kavita Patel. Patel was formerly a staffer in the Obama White House and is now a fellow at the Brookings Institution.

“If you change the federal budget that’s allocated for Medicaid, you could unintentionally decrease the state funds given in Medicaid,” says Patel, including in states like Texas, that have rejected Medicaid expansion funds offered in the Affordable Care Act. Patel says that Medicaid, Medicare and the Affordable Care Act are so intertwined, it’s hard to defund the latter, without destabilizing the former. She expects defunding efforts to continue, but at a less sweeping level than the continuing budget resolution — for instance, with Congress cutting funding for specific programs, like prevention and wellness spending.

But Dan Holler of Heritage Action for America, the political arm of the conservative Heritage Foundation, says Congress can easily strip away aspects of the Affordable Care Act like Medicaid expansion, health exchanges, insurance subsidies, and enforcement of penalties for individual taxpayers and employers.

“It’s a really, really easy thing to do from a technical legislative standpoint,” says Holler. “There would not be funds to address or enact those changes. Aside from that, things would go on as planned.”

Republicans’ chances of defunding health care reform get much harder after subsidies for taxpayers to purchase health insurance kick in in 2014. 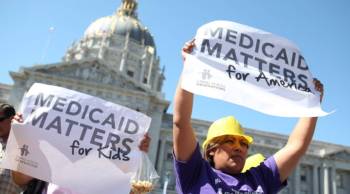