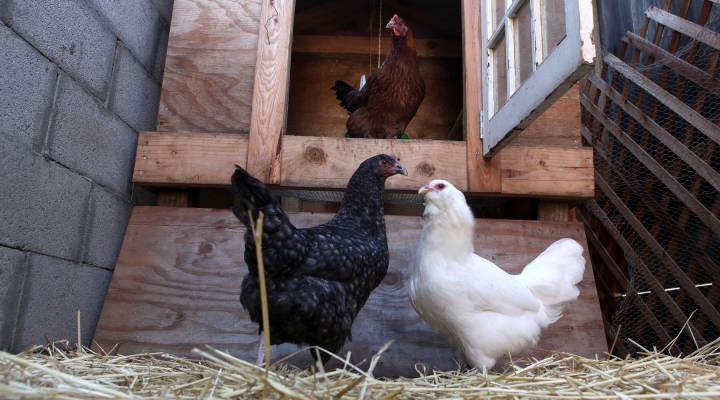 Chickens sit in their house in Heidi Kooy's yard, November 16, 2009 in San Francisco, California. Justin Sullivan/Getty Images
By The Numbers

So, the other day my husband and I were out in our vegetable garden.  (If you’ve been following my summer reports, this is a regular occurence.)

And we noticed bug damage. A lot of bug damage. Weird yellow bugs have pretty much destroyed our zucchini. My husband said half-jokingly that we should get some chickens. They could eat the bugs, and would provide us with fresh eggs. I thought it was a great idea; he had questions.

So, to continue our summer organic gardening cost-benefit experiment, we sat down at the kitchen table to decide if we should embrace the urban hen, or chicken out.

The following is, sorta, how the conversation went:

Nancy: Chickens are cool. Think about it: Eggs are expensive, and urban chickens could save us money!

Husband: Chickens are not cool — or not cool enough. Plus, we already get a good deal on organic eggs.

Nancy: But these eggs would be fresh from the backyard!

Husband: But it’s a lot of work. Some people say it’s easy but it looks like there’s a lot of cleaning up after them.

Husband [after thinking]: But I know there are a lot of people starting to buy chickens and put them in their backyard. And they seem very happy with their chickens.

Nancy: I’ll take that as a ‘maybe,’ do some research, and get back to you.

I took that as a challenge. So, my first step was to find an urban chicken farming expert. I came across Jennifer Blecha. She studies urban agriculture at San Francisco State University. She says, yes, there are a lot of urban chicken farmers.

And she thinks the trend started about 15 years ago, in Seattle. And she says it’s really taken off since then.

There are lots of urban chicken farming resources and websites now, too.  BackYardChickens.com is one — the owner, Rob Ludlow, says you’d be surprised at where the interest is coming from. It’s not just Seattle or Portland, Ore. or Berkeley, Calif. Over the past year, Ludlow says his site has gotten most of its traffic from New York, Chicago and Los Angeles.

He says people want to “become more self-sufficient and take part in grow-local and slow-food movements.”

Ludlow says people in the biggest cities, and around the country, want eggs from chickens that were raised humanely. And he says these new “urban chicken farmers” think the whole experience is fun, though I’m not so sure about the ‘fun’ part.

Fun or not, Ludlow says the costs of backyard birds vary wildly, for instance:

Jennifer Blecha paid $1,500 for her coop. (You got that right, she not only studies urban farming but raised chickens herself.)

She definitely didn’t save money on eggs. But she didn’t expect to.

“It’s like recreational fishing, after you buy the boat,” Blecha explains, saying that the upfront costs end up making each additional egg more expensive. She says that after six years, her production cost was probably cost about $1 per egg.

Blecha says her coop was extra expensive because it had to be outfitted for tough Minnesota winters. Our Beltway winters aren’t a breeze — but they aren’t Midwest cold, either. So we could probably get a cheaper coop.

After reporting and researching it, will we get chickens? I think we need to think it over a bit more.

But it does seem like – as with our garden – it’s not something you get into to save bundles of money.