Should you cancel your trip when there’s a travel advisory?

Should you cancel your trip when there’s a travel advisory?

This week the government released new travel figures. Roughly 22 million Americans have traveled overseas so far in 2013. They’ve been spending their money in places like Europe, the Caribbean, and the Middle East. In fact, the Middle East has seen a 6 percent rise in American travel for the year. But this week we also got a warning. The U.S. State Department has issued a worldwide travel alert through the month of August. What are you supposed to do about such a vague warning?

Mexico, for example, had a revised warning on July 12, 2013 (these travel warnings “recommend that Americans avoid or consider the risk of travel to that country”). Yet thousands of Americans travel to Mexico each year. But you can’t always anticipate when or if a country will end up on the State Department’s list.

Hobica says in reality, the chances of an American citizen being killed or injured in a terrorist or other attack anywhere are extremely slim. The number of U.S. citizens reported to the State Department as murdered in Mexico was 113 in 2011 and 71 in 2012 (these were not terrorist attacks). But how many were killed or injured in the United States in those years?

One option some travelers might consider is purchasing travel insurance, but Hobica says you need be careful about which type you purchase.

“The problem with travel insurance is it’s not going to protect you against a travel alert or even a travel warning. If there’s a terrorist attack that has happened within 30 days of your expected arrival, then under most travel insurance policies you can cancel. There are cancel-for-any-reason travel insurance policies. They cost about 25-50 percent more in the premium and you have to cancel within 48 hours or more ahead of your trip,” says Hobica. “Airlines are not going to let you cancel your non-refundable ticket because of a travel warning or travel alert. Obviously if you have a refundable fare, then you can cancel.”

Hobica says once in a while if there’s a disaster or terrorist attack, some airlines will re-book people to other destinations or let you get a refund.

But is traveling to a country that has a travel alert or warning — or even going to a neighboring nation — a way to get a deal on airfare?

“Not usually. I remember a couple of years ago in Thailand there was a lot of civil unrest. I expected to see fares to Bangkok go way, way down. Well, they didn’t actually. What Thai Airways did and other airlines did was they took their planes and they rerouted them. So they took the planes off of the Bangkok route for a period of time and then they used them on other high-demand routes. So I’ve never seen airfares go down, unfortunately, when there’s an incident,” says Hobica.

Some things to consider when traveling to a place that has a travel advisory:

Airlines won’t let you cancel or rebook a non-refundable airfare when there’s a travel alert. If there’s an actual terrorist incident (such as in Mumbai in 2008) that’s a different story. You would probably be able to rebook at a later date or choose a different destination. When the Nairobi Airport international terminal burned down earlier this week (although there’s no indication it was an act of terror), cancelling flights, British Airways allowed passengers to book flights to alternate destinations or delay their trips. And if a flight was actually canceled, refunds were offered.

Travel insurance won’t help you unless there’s an actual terrorist incident in your destination within 30 days of your arrival, or unless you’ve bought a more expensive “cancel for any reason” insurance policy. And if the destination is a known “no-go zone,” with a history of terrorist attacks, you may not be covered either.

Also, travel insurers have definitions of “terrorism” that may not correlate with the U.S. State Department’s — or your own. So read the fine print. Compare policies at SquareMouth.com or InsureMyTrip.com.

Hobica’s advice: If you’re skittish about traveling to international “hot spots” like Yemen or Egypt, no one will fault you for visiting a U.S. National Park instead. You probably haven’t seen them all. And really, you have a greater chance of drowning in your own bathtub or dying in a car crash than you do being a victim of a terrorist attack, even in Yemen. 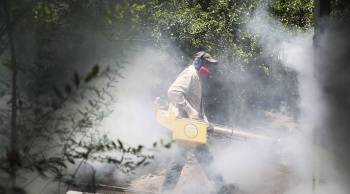 The CDC has issued a travel warning for Miami-area neighborhood