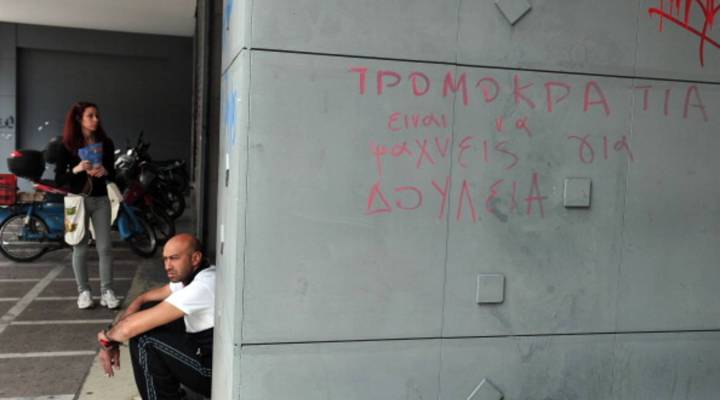 COPY
A man sits near the entrance of a Manpower Employment Organization (OAED) office in Athens on May 9, 2013, with graffiti on the wall reading 'terrorism is the search for a job.' LOUISA GOULIAMAKI/AFP/Getty Images
European Debt Crisis

A man sits near the entrance of a Manpower Employment Organization (OAED) office in Athens on May 9, 2013, with graffiti on the wall reading 'terrorism is the search for a job.' LOUISA GOULIAMAKI/AFP/Getty Images
Listen Now

Greek unemployment as a whole is at a staggering 27.6 percent. Analysts say that about 1.4 million people in the country are out of work .But what may be more alarming is the rate of unemployment among youth in Greece.

Right now the unemployment rate for Greek youth is at a little over 64 percent, up from 57.5 percent.

We caught up with 26-year-old Eleni Theodorou, a graduate of Aristotle University of Thessaloniki, the second-largest university in Greece.  Theodorou has been unemployed for about a year and a half.  She says it’s very stressful being a young person in Greece.

“Old people the age of our parents already have their jobs. We don’t feel productive,” says Theodorou.

She says that she is working part time as a secretary for pocket money, but that since youth unemployment in Greece is so stark, competition for jobs is much more intense.

“One year ago I went to an interview for a position for an English teacher. It was in Northern Greece,” says Theodorou. “There were around 400 candidates.”

Theodorou says that if things don’t look up she will consider leaving Greece. She lived in Germany for a year and could see the difference in the economy.

Prime Minister Antonis Samaras will meet with President Obama this week to talk about the employment picture in Greece.