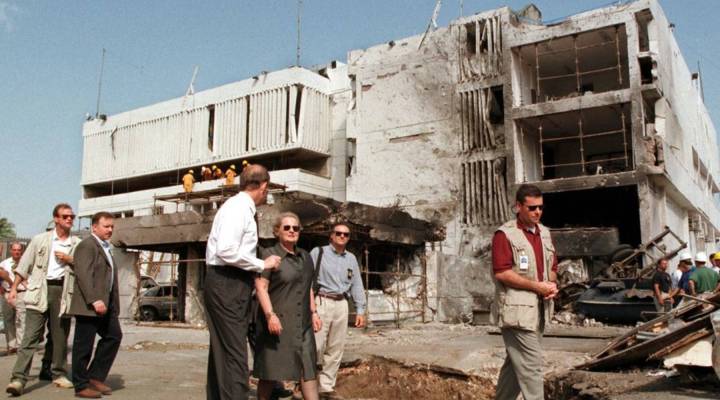 COPY
Secretary of State Madeleine Albright looks  at damage from a bomb at the U.S. embassy in Dar Es Salaam, Tanzania where 10 people were killed and 72 injured from a bomb blast, at almost the same time as another bomb went off in Nairobi, Kenya on August 7, 1998. ALEXANDER JOE/AFP/Getty Images

Secretary of State Madeleine Albright looks  at damage from a bomb at the U.S. embassy in Dar Es Salaam, Tanzania where 10 people were killed and 72 injured from a bomb blast, at almost the same time as another bomb went off in Nairobi, Kenya on August 7, 1998. ALEXANDER JOE/AFP/Getty Images
Listen Now

Wednesday marks 15 years since suicide bombers detonated trucks packed with explosives outside of U.S. embassies in Kenya and Tanzania. The bombings killed hundreds, wounded thousands, and brought to the attention of the American public a name that many hadn’t heard before: Osama Bin Laden.

In Kenya, the embassy stood in a busy, downtown area. Hundreds of people were killed and thousands injured. In Tanzania, the embassy was three miles from the city center. The death toll was a dozen.

“The [State] Department built more than fifty new buildings and moved probably a third of the diplomatic corps, fifteen thousand people, into new and safer buildings  around the world,” said John Bellinger, with the Council on Foreign Relations.

Over the next five years, around $5 billion was spent to equip embassies with windows and doors that could withstand bomb blasts, and to move other embassies altogether.

“It’s fundamentally about construction,” said Michael O’Hanlon, a senior fellow with the Brookings Institution.  “Construction of the building, construction of the grounds, various security barriers — and, of course, people to man those barriers, to man those checkpoints. You can spend a whole heck of a lot of money on those such things when you put your mind to it.”

That includes countries where there seems to be little threat of terror attacks. The U.S. is building a new, more secure embassy in London that will cost $1 billion.