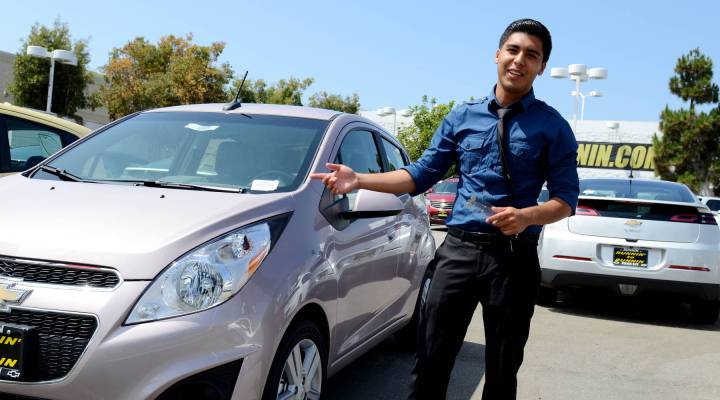 Subcompact cars and the income divide

Subcompact cars and the income divide

The economic downturn has spawned several distressing new trends since it started five years ago. More jobs have gone part-time, with fewer or no benefits. It’s becoming harder to break into the middle class. And it’s harder to stay there. More money is ending up in the hands of fewer people. And all kinds of industries are grappling with how to respond. The automobile industry is one of them.

Let’s say for a minute that we’re not talking about cars. Instead, we’re talking about the American Dream because isn’t that what auto companies are trying to sell us?

Edgar Perez is one guy with an American dream. Perez came to the United States from Mexico when he was a year old. Now at 19, he is a salesman at Bunnin Chevrolet in Los Angeles, and he took me for a test drive in a 2013 Chevy Spark.

“Did you get this job right out of high school?” I asked.

A Chevy Cruze is a small car that gets good gas mileage. And it’s inexpensive. It’s exactly the kind of car you’d expect a young guy like Edgar to drive. Edgar attends Santa Monica College, and he plans to get an MBA like a customer he met recently. “This guy graduated from Cal State Long Beach,” he says. “Got his MBA. He was winning more than $55,000 a month.”

Edgar was impressed. To him that was like being rich.

“His house was in Beverly Hills,” Edgar says. “Can you imagine? Being the number one top on the hill.”

So when Edgar gets his MBA and gets closer to that American Dream?

“Once I get an MBA, I would say I would still want a compact vehicle,” he says. “In the future, I’ll probably get the same Cruze, just in a newer model. A newer year in other words.”

This is the kind of statement that sends the auto industry into a frenzy: A young man who expects to make good money saying he plans on sticking with a compact car. But car manufacturers are facing a crisis fueled by high gas prices, a shrinking middle class, and young people saddled with more college debt than ever before. So the auto industry has to listen to people like Edgar.

“Just about every mainstream manufacturer is offering an A or B segment vehicle,” says Andy Lilienthal, a subcompact geek who started a website in 2007 called Subcompact Culture: The Small Car Blog. It was a hobby. But, when the recession hit, he noticed something.

“I kept thinking oh my gosh. We’re getting all these world-class small cars which is pretty amazing, considering back in the ’90s, early 2000s, subcompact cars almost disappeared from the landscape,” Lilienthal says.

But there’s a challenge. Cars are supposed to be aspirational, part of the American Dream. Remember? So the last thing people want is a car that reminds them of their diminished circumstances.

“You can tell from the names there’s been a big effort to convey that these are fun vehicles,” says Justin Berkowitz of Car and Driver. He says since 2006, the number of subcompact and mini car brands has doubled. “We hear Fiesta, party. And Versa being a typical Nissan fake word implying versatile. And all of these get at the same idea which is that they’re practical but fun. Please don’t think of this car as a punishment or as a constant reminder of your economic status.”

And, Berkowitz says, there’s an upshot. The growing influence of small cars means they’re getting better features: infotainment systems, GPS, iPod interfaces. “So at least if we’re going toward a lowest common denominator, it will be a very good low common denominator,” he says. “We will end up with safe, reasonable cars. You can call it a silver lining. We don’t have reason to despair just yet.”

And as for the one percent? They’re apparently jumping on the small car bandwagon. Berkowitz says luxury brands like BMW are, for the first time, offering smaller models for sale in the U.S.