Samsung has lost more than a billion dollars in market value this morning after the White House overturned a patent victory for the company. Earlier this summer, the U.S. International Trade Commission ruled that sales of some older iPhone and iPad models should be banned because they infringed on a Samsung patent.

But over the weekend, the White House overturned that ruling, saying sales of the iPhone 4 and older iPad model should continue.

It’s the latest battle in a long, litigious war between Samsung and Apple. The California electronics giant first accused Samsung of copying some of the iPhone’s distinctive design features.  Samsung then sued Apple for infringing on some of its patents on more fundamental mobile technology.

In June, the U.S. International Trade Commission agreed with Samsung about the fundamental technology part, saying older iPhones and iPads connect to wireless networks infringe on a Samsung patent. The commission made a ruling that would have banned Apple from selling those older models. But over the weekend, the Obama administration vetoed that ruling, saying the ban would hurt U.S. consumers and the economy.

Companies like Samsung say ought to be able to block the use of basic technology if another company won’t pay what they consider a reasonable royality to use it. Meanwhile, companies like Apple say it’s not fair to keep a product from market while they negotiate over these royalities — and the Obama administration agreed. 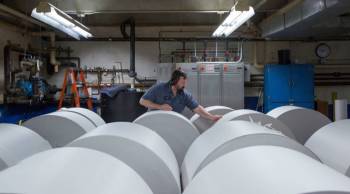 Why Trump’s tariffs on newsprint were overturned