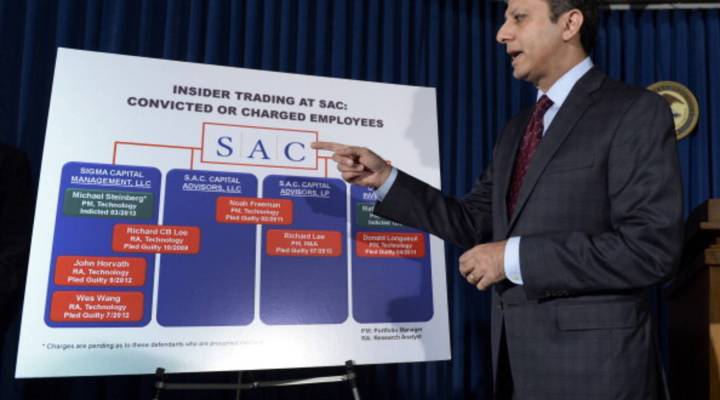 SAC: ‘A magnet for market cheaters’?

COPY
Preet Bharara, United States Attorney for the Southern District of New York speaks at a news conference July 25, 2013 about a federal indictment against SAC Capital, the hedge fund run by billionaire Steven A. Cohen. SAC Capital Advisors was charged in federal court in Manhattan in an indictment with wire fraud and four counts of securities fraud, as prosecutors allege the crimes were carried out from 1999 through at least 2010. TIMOTHY CLARY/AFP/Getty Images

SAC: ‘A magnet for market cheaters’?

Preet Bharara, United States Attorney for the Southern District of New York speaks at a news conference July 25, 2013 about a federal indictment against SAC Capital, the hedge fund run by billionaire Steven A. Cohen. SAC Capital Advisors was charged in federal court in Manhattan in an indictment with wire fraud and four counts of securities fraud, as prosecutors allege the crimes were carried out from 1999 through at least 2010. TIMOTHY CLARY/AFP/Getty Images
Listen Now

The Department of Justice did something dramatic this morning: It filed criminal charges against a prominent and profitable hedge fund called SAC Capital.

The fund is owned by the equally prominent and profitable billionaire, Steven A. Cohen. Some former SAC traders have pleaded guilty to insider trading, but now SAC itself is accused of having sanctioned that misconduct for more than a decade and intentionally hiring people who had an “edge.” That’s SAC speak for corporate insider contacts.

SAC has made a lot of money for its investors, with returns of 30 percent a year. But, at a press conference today, Preet Bharara, the top federal prosecutor in Manhattan, said those eye-popping returns are the result of eye-popping crinimal activity.

Bharara called SAC “a firm with zero tolerance for low returns, but seemingly tremendous tolerance for questionable conduct. So SAC became, over time, a veritable magnet for market cheaters.”

“We can’t put corporations in prison, but they are subject to a variety of reputational penalties,” says John Coffee, director of the Center on Corporate Governance at Columbia University. “On Wall Street, if you acquire a stigma, you are essentially out of business.”

Like the Galleon Group, a hedge fund whose boss, Raj Rajaratnam, was convicted of insider trading in 2011. The firm shut its doors in 2009, long before the actual guilty verdict.

If SAC Capital is found guilty, it could have its business charter revoked, says Max Wolff, chief economist for Greencrest Capital. But as with Galleon, criminal charges alone could sink the company, he adds.

“Usually, you’ll have one of two things happen,” Wolff says. “You either cease to be in business, or you have a long, slow rebuilding process in which, at the very best, you’re a sort of dessicated shadow of your former self.”

Many of SAC Capital’s clients have already withdrawn billions of dollars of their money, but its biggest client is hanging in: company founder Steven A. Cohen.

“There’s nothing to stop him from managing his own money, which is a considerable $10 billion,” Wolff says.

Cohen has denied any wrongdoing, and hasn’t been criminally charged. An SAC Capital spokesman said today the company “has never encouraged, promoted or tolerated insider trading and takes its compliance and management obligations seriously.”