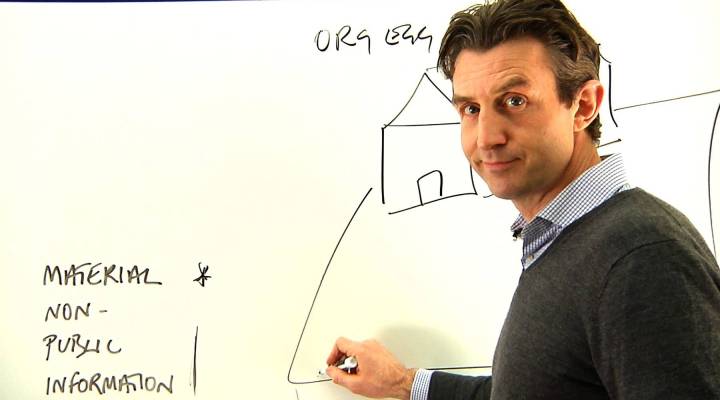 Lawmakers are considering yet another bill to ban insider trading. But the term "insider trading" seems open to interpretation. Senior Producer Paddy Hirsch helps us understand what it is and why it's a big deal. Angela Kim/Marketplace
Marketplace Whiteboard®

Lawmakers are considering yet another bill to ban insider trading. But the term "insider trading" seems open to interpretation. Senior Producer Paddy Hirsch helps us understand what it is and why it's a big deal. Angela Kim/Marketplace

SAC Capital was indicted today, charged “with criminal responsibility for insider trading offenses committed by numerous employees and made possible by institutional practises that encouraged the widespread solicitation and use of illegal inside information.”

So what does all that mean?

If the charges are true, it means that the company allowed and even encouraged its employees to cheat. They are alleged to have cheated by squirreling out what’s called “material non-public information.” That’s information about companies that no one outside of the company knew — and then the company used that information to make money.

If you want a quick-and-dirty explanation of insider trading, this Whiteboard video works. But if you’ve got a couple of hours, and want to enjoy a Hollywood classic, then you could do worse than watch “Wall Street,” the classic Charlie Sheen/Michael Douglas movie from the 1980s about the rise and fall of a young investment banker.

Sheen’s character, Bud Fox, breaks the law by using that all-important material non-public information at three points in the film:

Like those three moments in the film, there are three key components to information related to insider trading:

The gray area lies in talking about inside information. If you go to the bar and tell your BFF about the Boogle/Placebook deal and your pal uses that information to make money, are you breaking the law? Well, maybe.