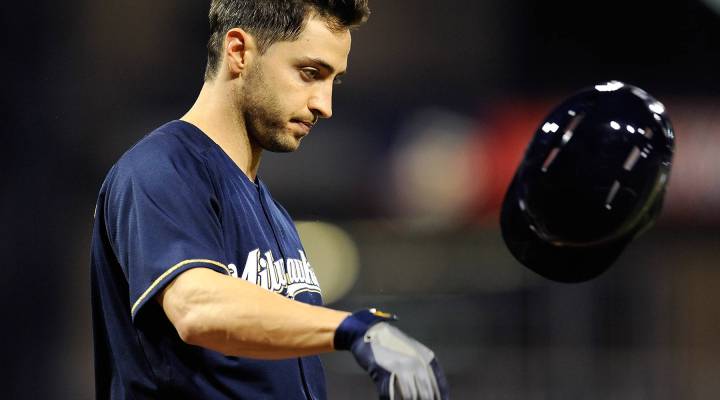 Ryan Braun’s suspension could be a blow to Milwaukee

Ryan Braun #8 of the Milwaukee Brewers throws his helmet after striking out against the Pittsburgh Pirates on May 15, 2013 at PNC Park in Pittsburgh, Penn. Joe Sargent/Getty Images
By The Numbers

Ryan Braun’s suspension could be a blow to Milwaukee

Ryan Braun #8 of the Milwaukee Brewers throws his helmet after striking out against the Pittsburgh Pirates on May 15, 2013 at PNC Park in Pittsburgh, Penn. Joe Sargent/Getty Images

Former National League M.V.P. Ryan Braun has been suspended for the rest of the 2013 baseball season for violating Major League Baseball’s drug prevention and treatment program.

Along with the New York Yankees’ Alex Rodriguez, Braun has been linked to a Florida clinic that allegedly supplied performance-enhancing drugs.

“As I have acknowledged in the past, I am not perfect,” Braun said in a statement. “I realize now that I have made some mistakes. I am willing to accept the consequences of those actions.”

When Marketplace reported on the story before, analysts said that any suspension this year would be of limited financial impact. But:

“You’re lessening your chances to win games,” says Howie Magner, senior editor of Milwaukee Magazine, “and then not nearly as many people are going to show up to the ball park. And if that’s the case they might have to reduce payroll and you get into something of a losing spiral.”

It’s all conjecture at this point, but Magner says he imagines “this is something that has [the Brewers] really worried.”

It’s worth pointing out that Braun’s bat hasn’t been golden this year, and the Brewers are having a horrible season. For now, though, plenty of fans are filling the stadium.

USC’s Carter thinks they’ll continue to come, since baseball has proved to be something of a Teflon sport despite a string of doping cases. “I don’t know that fans are shocked anymore, they just want to attend games,” he says.

There could also be savings for the Brewers, since they wouldn’t have to pay Braun for the time he’d sit out. His salary is $8.5 million this year and jumps to $10 million next season.