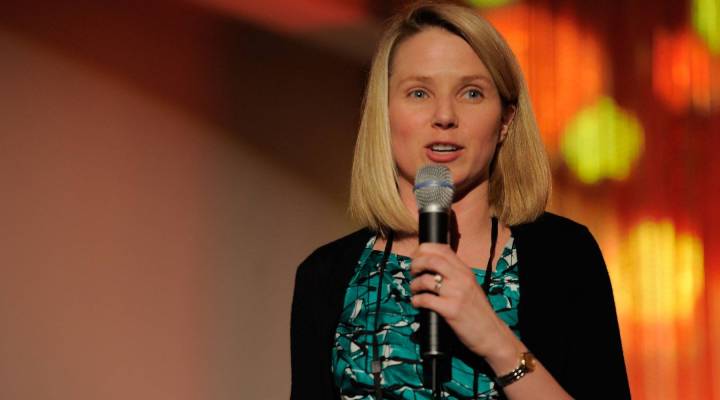 COPY
Marissa Mayer at a speaking event in New York City on May 24, 2011. It's a hint for one of the answers in today's Silicon Tally quiz! Jemal Countess/Getty Images for Time Inc.

Marissa Mayer at a speaking event in New York City on May 24, 2011. It's a hint for one of the answers in today's Silicon Tally quiz! Jemal Countess/Getty Images for Time Inc.
Listen Now

Tech industry analyst Jeff Kagan says Mayer, who has purchased sixteen companies during her tenure, including the micro-blogging platform Tumblr is “moving Yahoo in the right direction.” Still, Kagan isn’t certain the company is out of the woods just yet.

“Whether or not [the acquisitions] are actually going to mean anything to the bottom like at this point, is the question,” Kagan says.

Mayer’s aggressive attitude toward acquisitions like Qwiki, an app for creating videos, and Summly, a news aggregation app, have convinced many industry observers that her focus is on developing products.

“Having someone at the helm whose primary ortientation [is] around product is helpful for a company that had not had such focus in prior years,” says Brian Wieser, a senior analyst with Pivotal Research.

Still Mayer has more work to do. Wieser says, above all else, Yahoo is in the advertising business and “the problem is advertisers don’t want what Yahoo is selling.”