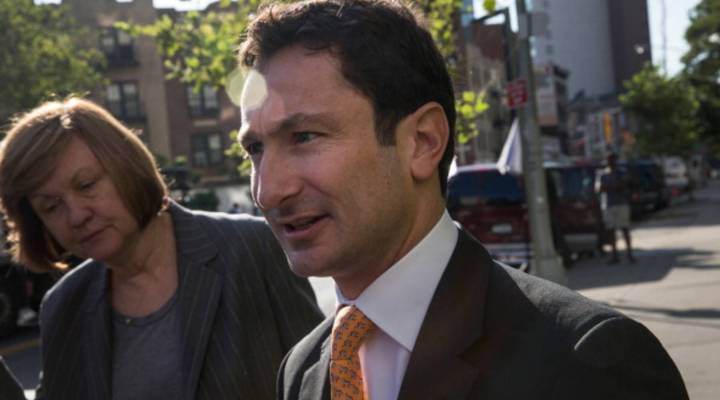 Fabrice Tourre is fabulous, but why is he so lonely?

COPY
Fabrice Tourre, a former Goldman Sachs mortgage trader, arrives at Federal Court for a lawsuit being brought against him by the Security and Exchange Commission (SEC), on July 15, 2013 in New York City. The SEC alleges Tourre misled investors by betting against the housing market, in the midst of the 2008 recession. Andrew Burton/Getty Images

Fabrice Tourre is fabulous, but why is he so lonely?

Fabrice Tourre, a former Goldman Sachs mortgage trader, arrives at Federal Court for a lawsuit being brought against him by the Security and Exchange Commission (SEC), on July 15, 2013 in New York City. The SEC alleges Tourre misled investors by betting against the housing market, in the midst of the 2008 recession. Andrew Burton/Getty Images
Listen Now

The trial of Fabrice Tourre started today. Does that name ring a bell? Perhaps you remember him as “Fabulous Fab” and recall a big deal he worked on at Goldman Sachs.

The Securities and Exchange Commission sued Goldman and Tourre in 2010, alleging they misled investors while selling subprime mortgage investments — which later failed spectacularly. Goldman settled for $550 million, in what was then the biggest SEC penalty, without having to admit to fraud.

Tourre, who has left Goldman and maintains he is innocent, decided to fight to clear his name. But he’s the only current or former Goldman banker on trial in the New York courtroom. And as fabulous as “Fab” might have been, he was also a relatively junior executive.

“One of the questions the jury is likely to have is, ‘Why is it the SEC prosecuting somebody who is of relatively low rank for what’s claimed to be such a major fraud and violation?'” asks Joe Grundfest, professor of law and business at Stanford University and a former SEC commissioner.

It’s often hard to link senior executives to specific products, says James Cox, a corporate and securities law professor at Duke University. Higher-ups may know about certain trades, but their culpability in alleged misdeeds is harder to prove.

“It’s pretty easy to isolate the salesman’s involvement,” he says, “but when you start going into how it all got assembled and who knew what when, it becomes fuzzier.”

Not to mention, a whole lot more expensive to fight, says Cox, because companies will call in their legal A-teams to protect the people in the C-suites. “If you start going after senior level individuals, you have got the tiger by the tail,” he says.

“This might give the SEC their first case victory for people they allege showed this extreme arrogance in the years leading up to the financial crisis,” he says.

In other words, says Kimmel, even though justice may not be wholly served, the SEC may just want to fight the fight it can win.