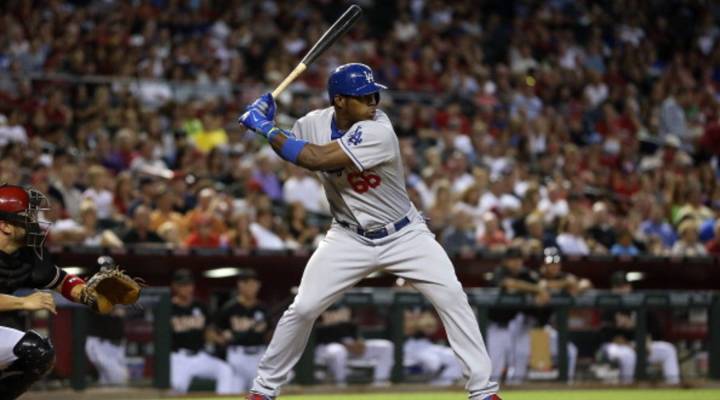 Yasiel Puig #66 of the Los Angeles Dodgers bats against the Arizona Diamondbacks during the MLB game at Chase Field on July 10, 2013 in Phoenix, Ariz. Christian Petersen/Getty Images
By The Numbers

Yasiel Puig #66 of the Los Angeles Dodgers bats against the Arizona Diamondbacks during the MLB game at Chase Field on July 10, 2013 in Phoenix, Ariz. Christian Petersen/Getty Images

So how do the players get pumped up? Their at-bat songs, of course — those hips-shaking, head-thumping anthems that play for each batter as they walk up to the plate. Players choose the tunes themselves, and they can vary from game to game.

So what’s your at-bat song? We’ve put together a Spotify playlist, and we’ll keep adding more suggestions from listeners. Leave your comment here or on our Facebook page, or tweet us @MarketplaceAPM.

Here’s the playlist so far:

UPDATE: Thanks for all your contributions to our playlist! Even our staff here at MP weighed in, with the following ideas:

Stadiums and teams received a lot of publicity about the trend five years ago. At that time, according to the Wall Street Journal:

Perhaps surprisingly, Major League Baseball does not have strict guidelines governing walk up songs. It only specifies that the music must be over by the time the batter reaches the dirt cutout surrounding home plate. As for the content of the song, baseball leaves it up to the clubs to “use good judgment.”

Sports Illustrated reported in 2011 that the trend wasn’t new and in fact had two specific reasons for becoming such a standard part of a baseball game:

The origin of the intro song as theater is believed by many to be rooted in the early 1970s when the Yankees played “Pomp and Circumstance” upon closer Sparky Lyle’s entrance into games. And it accelerated in the 1989 movie Major League when Charlie Sheen’s character. Rick Vaughn, a fictional closer for the Indians, ran onto the field to the raucous “Wild Thing.”

For example, here’s what this weekend’s Home Run Derby lineup:

Brantley Gilbert, “Kick It In The Sticks”

Thousand Foot Krutch, “I Get Wicked”

In the public radio All-Star game, Marketplace might be pressured to select Ginger Rogers’ version of ‘We’re in the Money‘ or Frank Sinatra’s take on ‘Stormy Weather‘. But a lot of us would prefer something with a little more adrenaline. Perhaps some Wu Tang Clan?: