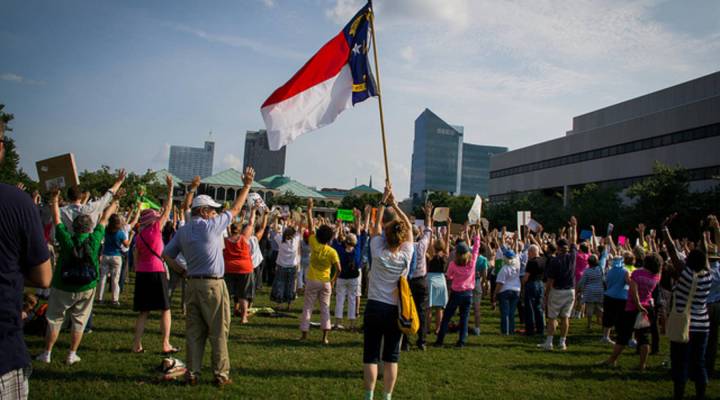 On a Monday in early July, Kat Rhodes, who worked at a diagnostic testing laboratory in Burlington, N.C., until her job was eliminated, went down to the state legislature to take part in an organized protest movement called “Moral Mondays.” Rhodes was one of about 70,000 people who, on that Monday, lost federal unemployment benefits due to a bill passed by the state legislature.

“It is very dehumanizing,” said Rhodes, “to be in a position where you have to ask or beg for things.” Rhodes, a mother of two, said when she sought aid, the state welfare system offered little help — but did give her a piece of advice.

“If you go for rental assistance or you try to apply for utility assistance, they tell you, ‘we don’t have money. Go to your local churches,’” said Rhodes, who is not a churchgoer.

Still, some in North Carolina have found relief from the church.

Charles Fuller, who attends Sunday services at Full Gospel Tabernacle, a Pentacostal church in Graham, N.C., is on disability.

“The churches do help a lot,” Fuller said. “I’ve been in bad shape, financially, since I started this church. And they have always stood by me and helped me.”

Reverend Kevin Barbour, the leader of Full Gospel Tabernacle, whose fiery sermons belie a far quieter demeanor, says he believes it is the church’s duty to help those in need. He does not believe it is the government’s responsibility.

To support his belief, Barbour references a line in the book of Philippians which reads: “But my God shall supply all your need according to his riches in glory by Christ Jesus.”

“My message,” said Barbour, “is don’t depend on the government. Of course it’s a lot easier when you receive that unemployment, but if it runs out and you only get 26 weeks, lean on the lord. Lean on him.”

Thirty miles away, at St. John’s Missionary Baptist Church in Durham, the message could not be more different. This week, in Sunday School, a class of adults is studying the book of James.

“James,” said Reverend Jonathan Wilson-Hartgrove, “says: ‘you can’t say to your brother who is hungry: be thou warm and well fed. We’re praying for you. Hope all’s well.’” Wilson-Hartgrove said he’s disappointed in the state lawmakers, many of whom are Christian.

“I don’t mean to say these people aren’t committed to Jesus and to Christianity,” Wilson-Hartgrove said. “I mean to say, as a pastor always has to say to people at some times, that they’re gravely wrong and that if they do not repent, they will go to hell. And unfortunately because they’re leading our state right now, our whole state will go to hell.”

The debate over the Biblical imperative to help the poor is centuries old, but in North Carolina it has taken on a new urgency due, in part, to Reverend William Barber, president of the North Carolina chapter of the NAACP, who leads the Moral Mondays protest movement.

“Whenever we talk about moral issues it’s about sexuality, abortion and prayer in the schools,” said *Barber, who hunched outside Binkley Baptist church in the rain in order to grab a quiet moment with a reporter following his delivery of a rousing Sunday oratory that was aimed at garnering support for Moral Mondays.

Barber, who is pastor of the Greenleaf Christian Church, Disciples of Christ, said, “When we talk about budgets, we don’t call moral voices, when we talk about health care. But those are the centerpieces of all our major faith. How you treat the poor, how you do justice. If you remove all the scriptures that deal with that you wouldn’t have a Bible.”

North Carolina lawmakers insist they are simply trying to get the state out from under crushing debt.

“We don’t have any more money to pull out of a magic hat,” said State Senator Thom Goolsby, who is also a Christian. Goolsby said he respects the protesters’ right to voice their opinions, but added that Moral Mondays strikes him as less a Christian movement than a political one.

“We can’t run a state that’s bankrupt,” Goolsby said. “Where were [the demonstrators] when the Democrats were running amok, running our taxes up?”

Not far from Goolsby’s office, another Moral Monday protest would soon begin. The lawn outside the state legislature filled with about 1,000 protesters of all ages, picking their way carefully across the muddy ground. Many had been bussed in from a local church following a sermon by Reverend William Barber. Some carried signs that bore verses from the Bible, addressing treatment of the poor, but not all were motivated by faith. Their demands — expressed on signs and in chants — ran the gamut from women’s rights to marriage equality to a ban on fracking.

A few dozen demonstrators tied green strips of cloth around their arms, signifying they intended to be arrested inside the General Assembly building. The crowd of protesters parted for them, and, to applause, they marched in, where they stood and singing and chanting. Capitol police warned the protesters to leave, but they stood firm until they were handcuffed by police, and still singing, marched off to jail.

*CORRECTION: In the original version of this story, we incorrectly identified Rev. William Barber as pastor of a Baptist church. The text has been corrected.