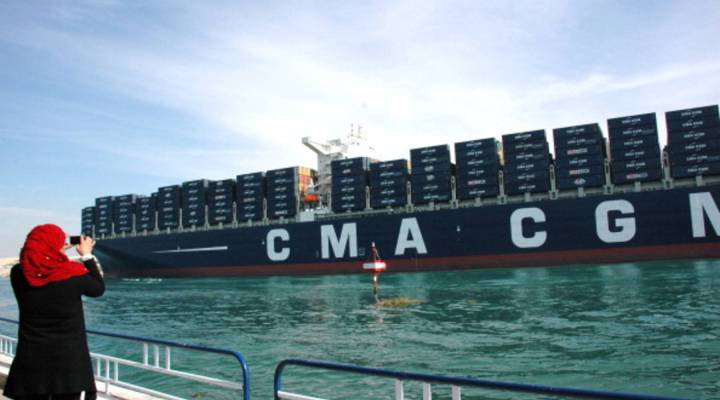 COPY
An Egyptian woman takes a photo a container ship as it sails through the Suez Canal. AFP/Getty Images

An Egyptian woman takes a photo a container ship as it sails through the Suez Canal. AFP/Getty Images
Listen Now

Egypt is, of course, at the top of our minds today. News of the turmoil in that country has been hammering oil markets. Prices are up over $100 a barrel today for the first time in nearly a year. But Egypt doesn’t produce much oil, so why is the turmoil in Egypt rattling oil markets?

“Egypt controls the Suez Canal and a number of important pipelines in the area,” explains Christopher Knittel, Professor of Energy Economics at MIT’s Sloan School of Management.

Around four million barrels of oil go through the Suez Canal every day from all over the Middle East and not using the canal is expensive, says oil analyst Stephen Schork, author of “The Schork Report.”

“The only other way is coming around the horn of Africa,” says Schork. “That is going to add weeks to the transport of this oil,  and the longer the oil sits on a tanker transiting the ocean, your costs go up per day, your fuel consumption to move the vessels goes up. It’s going to cost you a lot more to get that oil to the market.”

The markets are also worried that the political upheaval in Egypt will spread, says Jim Bushnell, a professor of economics at the University of California, Davis. “Concerns about a kind of spill-over risk,” he says. “That unrest in Egypt could signal unrest in other parts of the Arab world that are oil producers.”

It’s all speculation for now, says Bushnell, but the implications are real. We’re likely to see higher gas prices as soon as this weekend.

“Usually when crude oil prices increase, the effects are seen at the pump very quickly,” he says.

The fact the U.S. is producing more of its own oil and importing less won’t help, says Bushnell, because oil is a global product, so any disruption in production anywhere affects the price of oil everywhere.