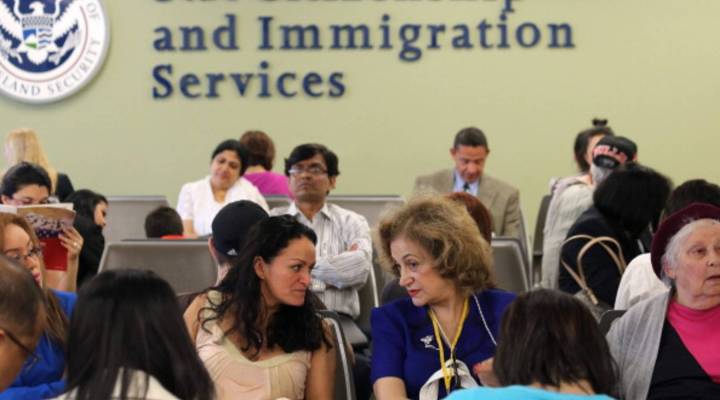 In this file photo, immigrants await their turn for green card and citizenship interviews at the U.S. Citizenship and Immigration Services (USCIS) Queens office on May 30, 2013 in the Long Island City neighborhood of the Queens borough of New York City. John Moore/Getty Images
By The Numbers

In this file photo, immigrants await their turn for green card and citizenship interviews at the U.S. Citizenship and Immigration Services (USCIS) Queens office on May 30, 2013 in the Long Island City neighborhood of the Queens borough of New York City. John Moore/Getty Images

The Senate passed comprehensive immigration reform legislation on Thursday. The bill includes a proposal to spend nearly $50 billion to beef up security at the U.S.-Mexico border. The money will be used to hire around 20,000 border agents, build more fencing and buy high-tech surveillance equipment.

Many view that spending as a type of “stimulus” for border towns that are struggling economically.

“Certainly we know that there will be around 20,000 jobs created, in terms of border patrol jobs,” Chris Wilson of the Wilson Center’s Mexico Institute said. “There’s another $7.5 billion in the amendment for more fencing along the border. Somebody has to build those fences.”

If the much-discussed “path to citizenship” does become law, it may change how immigrants, especially those who used to be undocumented, compensate for their lack of access to the formal economy by creating underground small businesses.

“I had a crazy idea that I wanted to go to college, but I was faced with the obstacle of not being able to work, and being too afraid to work with fake documentation,” said 25-year-old Honduran immigrant Jose Luis Zelaya. “I have never had a loan from a bank. I was not able to apply due to my immigration status. So I relied on crocheting and I started making a lot of beanies and scarves and headbands.”

And more enforcement and openness could help crack down on some of the scams perpetrated against immigrants. In a partnership with ProPublica, Marketplace looked at underground labor brokers in Latino Chicago known as ‘raiteros.’ And the second part of our ProPublica Chicago story, we looked at how U.S. companies benefit from undocumented immigrants.

LISTEN: The Backstory behind ‘Taken for a Ride’
ProPublica’s Michael Grabell and Marketplace reporter Jeff Tyler answer questions about their joint investigation in this special Marketplace podcast. Listen now

Finally, it is worth thinking about the Latinos who qualified for the DREAM Act, and how their lives changed when they stepped out of the economic underground and into the formal economy. This story may be repeated, in much larger numbers, if immigration reform is passed by the House and becomes law — though that is a big “if”.