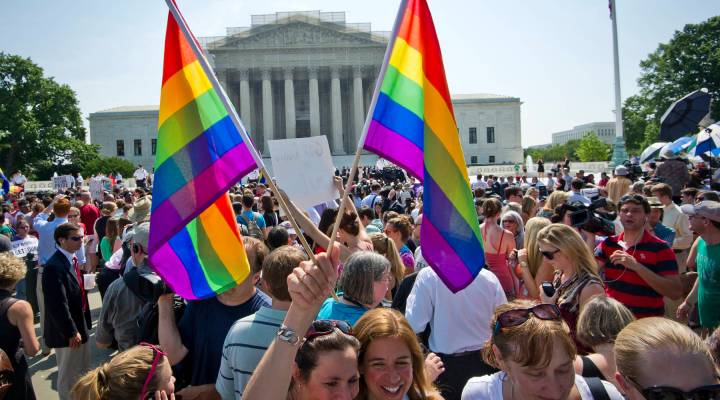 COPY
Hundreds of people gathered outside the U.S. Supreme Court building in Washington, DC on June 26, 2013 in anticipation of the rulings on the Defense of Marriage Act (DOMA) and California's Proposition 8. MLADEN ANTONOV/AFP/Getty Images

Hundreds of people gathered outside the U.S. Supreme Court building in Washington, DC on June 26, 2013 in anticipation of the rulings on the Defense of Marriage Act (DOMA) and California's Proposition 8. MLADEN ANTONOV/AFP/Getty Images
Listen Now

In a 5-4 ruling, the Supreme Court struck down on Wednesday the Defense of Marriage Act (DOMA), the federal law which denies same-sex couples the same federal benefits as opposite-sex couples. The majority opinion states that the 1996  law “violates basic due process and equal protection principles.”

Here’s the AP with the details on the decision:

In the case involving the federal Defense of Marriage Act, Justice Anthony Kennedy wrote the majority opinion, joined by the court’s liberal justices.

“Under DOMA, same-sex married couples have their lives burdened, by reason of government decree, in visible and public ways,” Kennedy said.

“DOMA’s principal effect is to identify a subset of state-sanctioned marriages and make them unequal,” he said.

The legality of DOMA was questioned by a case known as United States v. Windsor. Edith Windsor, who was widowed when her wife Thea Spyer died, challenged the $363,053 estate tax she was forced to pay when she received Spyer’s estate. DOMA denied such federal benefits to legally married gay and lesbian couples in the 12 states, plus the District of Columbia, that allow same-sex marriage.