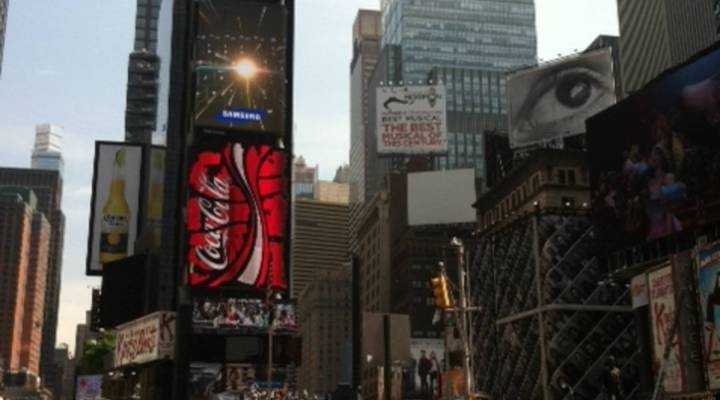 It’s a hot summer afternoon at the TKTS ticket booth in Times Square. A line has just started forming. Janice Turner from Bristol, Tennessee is here with her husband. The couple uses TKTS every time they visit New York.

“We want to see certain shows, but we also want a good price,” says Bristol. “We hope to see Book of Mormon or Mamma Mia.”

Tickets for The Book of Mormon won’t be on the board today because the show is sold out, and TKTS only sells theater’s extra seats. The business turns 40 today, and TKTS has made an international name for itself selling Broadway’s leftovers.

“Shows look at their inventory the day before and they say: I’ve got tickets to sell, I don’t have tickets to sell,” says Victoria Bailey, executive director of the Theatre Development Fund, a non-profit that owns TKTS.

“A good year for TKTS: You need a lot of shows running, doing well enough that they keep running, but not so well that they don’t have empty seats and need us to sell seats for them,” she explains.

Bailey says sales are down this year because shows haven’t had long runs and those that have, like The Book of Mormon, are so popular, they don’t have extra tickets. But TKTS is about more than selling tickets, says Kara Larson, principle of Arts Knowledge, a marketing firm that specializes in the arts.

“It really visually brands Times Square as a theater district, and it creates a gathering place and a useful service for New Yorkers and visitors to New York,” she says. “I think it’s a great democratizer of theater in New York.”

Larson notes critics have said TKTS pushes ticket prices up because theaters know that they can get rid of seats if they overcharge. TKTS’ Victoria Bailey says Broadway ticket prices have risen sharply over the years. Tickets now generally run $100-150, but can easily be more than twice that. Still, she says, you don’t have to shell out that kind of money to see a show. You just have to wait.

“There are no shows that don’t eventually come to the booth,” she says. “Sooner or later, everybody’s ticket sales get soft. Someday, we will probably have Book of Mormon at the TKTS booth.”