Why forks in your office kitchen keep disappearing

Why forks in your office kitchen keep disappearing

At lunch time at Local Projects, a media design firm, it’s every person for themselves when it comes to silverware. About 40 workers share the office kitchen. Donna Meredith works here, and she’s desperate for a spoon.

“Here I am making some tea,” she says, “and I need to stir it up. So I end up using a knife. Silverware has always been an issue at every office I’ve worked in.”

Her coworker Miriam Lakes deals with the missing spoon problem another way.

“I tend to hoard one at my desk,” she tells me. “We have this specific kind that are nicer, like heavier weight spoons, that I like to just keep around me.”

And don’t even get her started on the missing mugs.

“It’s definitely like every two weeks or so,” she laments, “there will be an email. ‘Have you seen my mug?’ And there will sometimes be a photo of it, or just a detailed description, asking for it back.”

It’s not that the design firm’s employees are petty. But having to worry about your kitchen objects, at work, it really bothers people. I talked to Alison Green about it. She’s a management consultant, and she runs the blog Ask A Manager. She says she hears a lot of grumbling about kitchenware.

“I think,” she says, “it speaks to a larger trend of people feeling like, a sort of care that used to be toward them from their workplaces is increasingly going away.”

That kind of care used to have a face. People like receptionists, and office managers.

“In terms of the percentage of the labor force that works in office administrative support,” says Mike Konczal, an economic research fellow at the Roosevelt Institute, “it’s been a decline over the last several decades.”

He says that since the recession hit, U.S. companies have cut about a million office support positions.

“Part of it is technology,” he explains. “It’s much easier to you know run your calendar than it was maybe 30 years ago, or simple things like getting a flight or booking a car can be done over your phone.”

But collecting stray silverware? So far that’s beyond the realm of current technology.

“There isn’t that Rumba yet.” Konczal jokes. “So, once that robot comes maybe things will be different. But for now, you’re going to have a lot of people who are just kind of angry in the workplace.”

Back at the design firm, Jenny Kutnow and Miriam Lakes say missing silverware can be annoying, but it’s not that big of a deal.

“I think if it came down to whether we could buy a new typeface or buy new silverware,” Kutnow says, “I would vote for the typeface.”

“We’d all just be eating with our hands,” laughs Lakes. 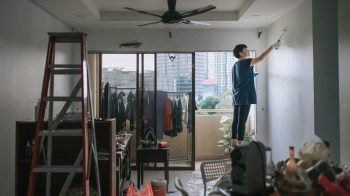 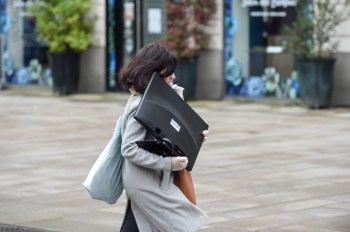