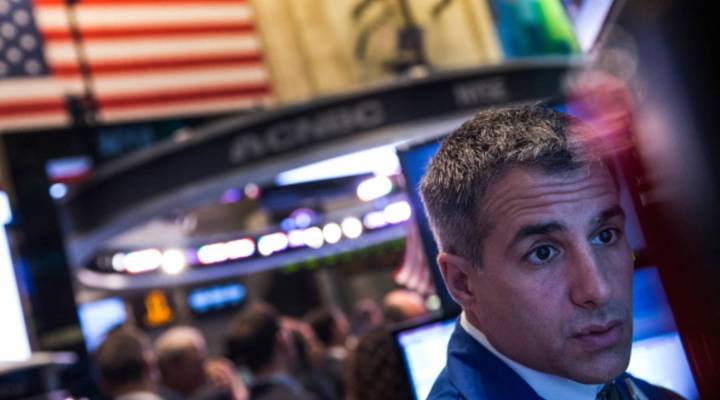 All eyes on the Federal Reserve

COPY
A trader works on the floor of the New York Stock Exchange during morning trading on June 11, 2013 in New York City. Andrew Burton/Getty Images

All eyes on the Federal Reserve

A trader works on the floor of the New York Stock Exchange during morning trading on June 11, 2013 in New York City. Andrew Burton/Getty Images
Listen Now

Today on Wall Street, all eyes are on the Federal Reserve. The Fed is expected to announce what it plans to do with interest rates and whether it will continue its massive bond buying program known as quantitative easing.

Every month, the Federal Reserve buys $85 billion worth of bonds. It’s like pumping money into the economy. Today, the Fed is expected to announce a slight reduction in that aid.

“I think the markets ought to be seeing this as a good sign,” says Lawrence White, a professor of economics at NYU’s Stern School of Business. White says if the Fed scales back the aid, the markets will see it as a vote of confidence in the economy. But, he says, if the Fed raises interest rates, that could hit markets and consumers.

“They’ll say, ‘uh-oh, the Fed thinks we may be getting into inflation territory!'” says White. “It will be even harder to get loans, mortgage interest rates will go up.”

That could put downward pressure on the economy says equity analyst Paul Kedrosky.

“The Bizarro World thing that comes out of this is that, as a result of the economy improving, the economy is likely to get slightly worse.” Kedrosky says if the Fed’s actions aren’t too drastic, the economy would likely rebound quickly. It would just need to get used to standing on its own again.

Audio Extra: Gus Faucher, senior economist at PNC Financial, shares his take on how and when the Fed should ease off its monetary easing.