For millennials, a patchwork quilt of part-time jobs will have to do

For millennials, a patchwork quilt of part-time jobs will have to do

A well-paid, full-time job with benefits… That’s a rare experience for many millennials now. Part-time, contract and freelance gigs are on the rise in the U.S. economy. In fact, according to the American Staffing Association, over 40 percent more people have temp jobs now than in 2009; and many college-educated 20-somethings are stuck in them.

Rachel Bailey, 26, of Athens, Ga., knows what it’s like. “It feels like my whole career is just this patchwork quilt of different jobs,” Bailey says. She’s done everything from waitressing to online marketing to freelance journalism. She’s also taken one-offs like art direction for a new restaurant and even prosthetic breast sales.

“Work keeps coming, but it’s kind of random. I just take whatever I can.”

Bailey’s jobs added up to about $28,000 last year. After she pays rent, student loans, groceries and other necessities, there’s not much left. Her roommate, 26-year-old Alyssa DeHayes, does have a full-time job, but earns less. “I drive a ’98 Honda Civic and God bless that car,” DeHayes says. “It’s hanging in there.”

All this underemployment is putting a crimp in young people’s consumption… and by extension, the consumer economy as whole. It also limits their savings. Labor economist Heidi Shierholz says when young people graduate and enter a weak job market, they never make up their lost earning power.

“Ten to 15 years of lowered earnings,” Shierholz says. “I look at that and I think that’s the down payment on a house.”

Can we afford the consumer economy? Marketplace explores how we consume, what we get from it, what it costs and whether we can keep it up.

Explore the whole series and play the game.

Poor jobs prospects are also making millennials gun-shy about borrowing, another linchpin of the consumer economy. A recent Pew study shows young adults shrunk their debt levels during the recession. Home, auto and credit card debt declined — but student debt is still on the rise.

25-year-old Sibel Yaman of Raleigh, N.C., says she swore off credit cards after racking up $3,000 in debt. “My generation grew up on credit and I know a lot of people whose credit is really bad,” Yaman says. “I fell into that trap and now I have to be really careful.”

Yaman recently landed her first full-time job as a mortgage sales assistant after working as a temp at the same bank. It’s not her dream job. She wants to open her own public relations firm one day.

But Yaman says it’s a steady paycheck and that’s more than some of her friends have.

“I know a lot of great, smart, brilliant people that just want to have solid work.” 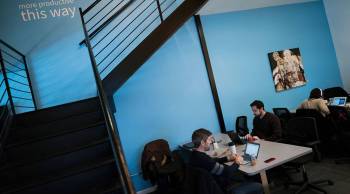