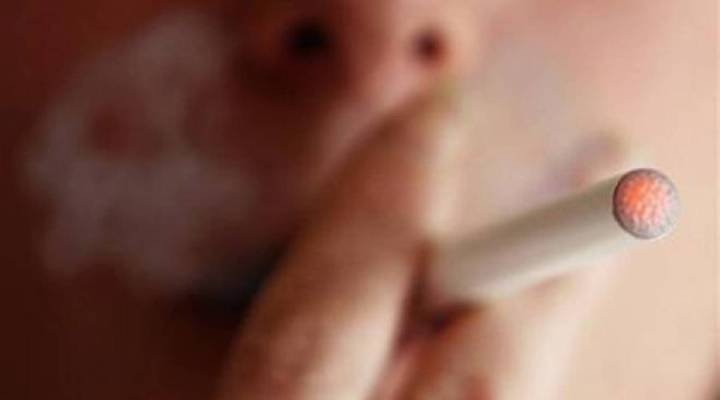 At a bar in the Crown Heights neighborhood of Brooklyn, 32-year-old Andy Lee takes a drag from a Puf brand e-cigarette. He started smoking them about six months ago.

“I wanted to quit smoking, and I wasn’t ready to do it cold turkey,” says Lee. “Unlike other forms, like the patch or the gum, e-cigarettes still let me have the feeling like I’m smoking.”

E-cigarettes contain liquid nicotine that turns into a vapor smokers inhale. Lee says e-cigarettes are sold pretty much everywhere now, and a lot of people he knows are starting to buy them.

“My friends are slowly ditching regular cigarettes for e-cigarettes,”  he says.

Sales of e-cigarettes are expected to double this year to about $1 billion. Meanwhile, sales of regular cigarettes have been declining for 40 years (they still total $80 billion). Those numbers have gotten the attention of big tobacco. Last week R.J. Reynolds unveiled its e-cigarette, Vuse.

“Part of our transformation strategy is really about redefining tobacco enjoyment,” says Stephanie Cordisco, head of R.J. Reynolds’ e-cigarette division. “We expect this is going to be a significant game-changer for our industry and will deliver a very strong profit to the bottom line.”

Until recently, most e-cigarette makers have been small, independent companies, but now Altira and R.J. Reynolds are rolling out e-cigarettes and Lorillard recently purchased Blu, a well established e-cigarette brand.

“It’s still a relatively new category, but it’s growing leaps and bounds,” says Bonnie Herzog, a tobacco analyst at Wells Fargo. “In the next 10 years, there’s a good chance consumption of e-cigs could surpass the consumption of traditional cigs.”

Herzog attributes that growth to a number of things: E-cigs are usually less expensive than regular cigarettes, they can be smoked indoors and don’t carry the stigma regular cigarettes do. Most importantly, says Herzog, many smokers, like Andy Lee, see them as a way to help them quit or cut back, while still enjoying the smoking experience.