There are certain words we can’t use on-air, or American Public Media would get slapped with a fine from the FCC. The maximum fine? $325,000.

It’s against federal law to use obscene, indecent or profane language in a broadcast. Which makes it all the more curious that more and more advertisers seem to not give a … you know where we’re going with this.

Take the new ad for Philips Norelco’s razor, which features a young guy shaving his beard, and more:

“I’d wink at me,” he says, looking in the mirror as his razor travels across his face. He moves on to his chest. “I’d share a shawarma with me.” Next, a shot of hair falling to the ground, and then, his boxer shorts are lowered. The more work he puts in with his razor, the more his self-confidence seems to grow. And, as he admires himself in the mirror we hear him say, “I’d f— me.” Exactly what he says is bleeped out, but you can guess, rather easily, what was omitted.

We’re hearing a lot of bleeping in ads these days by mortgage refinancing services, mattress stores, and even Frank’s RedHot sauce.

One ad by Frank’s RedHot has a little old lunchlady who explains to kids why her sloppy joe’s are so good: “Frank’s RedHot. I put that s— on everything.” But even when bleeped, profanity can be jarring.

Why are advertisers going there? Edward McQuarrie, a professor of marketing at Santa Clara University, says we can chalk up all this naughty language to what he calls “the advertiser’s dilemma.”

“Most of their audience is working absolutely as hard as they can to ignore, shut out and pay them no attention whatsoever,” says McQuarrie.

However, McQuarrie notes that the strategy of using shocking language will only work for some companies. “You’ll never see Coke or Pepsi put a bleep into their ads,” he says. Effervescent, fizzy drinks packed with caffeine are selling happiness. Sweetened beverages don’t need swear words, according to McQuarrie.

But some advertisers do have to resort to extreme strategies. Just keep in mind, he says, that famous show business saying: “I don’t care what you say about me, as long as you spell my name right.”

McQuarrie says advertisers are hoping consumers will remember a brand’s name, without remembering why. But using language the FCC calls indecent can be risky. If advertisers offend consumers, they can lose sales. So, when is it okay for an ad to use a strategy like swear words?

Patti Williams, a professor of marketing at Wharton, says it depends on the brand. “We all have friends, right? You know you have friends, some of whom swear like sailors, and when they swear like a sailor, it doesn’t shock you because you expect it,” she says.  When a company like Axe deodorant or Benneton creates an edgy ad, consumers have seen them before, so they’re more likely to be okay with it.

That means, says Williams, consumers are more likely to be okay with bad language from some brands, like Frank’s RedHot, than others.

Philip Norelco’s Facebook page is filled with comments about its ad, both good and bad. Monica Cole, director of One Million Moms, a religious activist group, understands the negative posts.  “It’s completely offensive and has drawn many loyal customers away.” Cole says she’s not a fan of the Philip Norelco’s ad. “Ten year olds probably still know what it means and what’s being said.”

But Philips Norelco says its ad is targeted to 18-25 year olds, not children, or, moms. And the company says the ad has been successful. Patti Williams says, in this case, the wrath of moms like Cole will only make Norelco’s razor that much more popular with its target audience of young men — which may come as no surprise to parents. 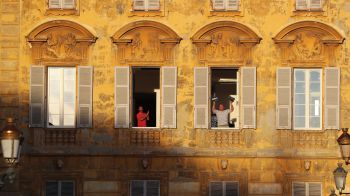