Foster families get the Disney treatment

Foster families get the Disney treatment

On Monday, ABC Family will debut the new drama “The Fosters.” It focuses on the lives of The Foster family: two moms, one biological son, two foster children — now adopted — and, a new foster kid, Callie.

The idea, said Kate Juergens, executive vice president of programming for ABC Family is to give viewers a better idea of what foster families are like.

Advocates are encouraged by the show, and the possibility that it can help change foster care’s image. They argue that the foster care system is often so vilified that it drives families away.

“The challenge is that if foster parents commit a crime or abuse a child, that’s what ends up on the news,” said Hannah Gregory, founder of Shoestring, a marketing agency that works with nonprofits. Gregory says changing an image means educating the public and that takes money.

“That’s usually what a public service campaign is, which is very very costly for a nonprofit to do, which is where the corporations come in,” she said.

Jeanne Pritzker is founder of the nonprofit Foster Care Counts. Her organization partners with corporations and community groups to improve the lives of foster children. Her corporate partners include Nestle and Paul Mitchell.

“Corporations have the opportunity to bring legitimacy to this issue in a way that the general public doesn’t,” she said.

Foster Care Counts is trying to increase opportunities for foster kids by changing the image of foster care, bringing more corporations into the fold, and attracting families from all along the socio-economic spectrum. By creating a bigger coalition, she is hopeful more foster kids will be able to access quality education, and have strong mentors. Right now, only about 3 percent of foster kids graduate from college, but she believes it can change.

“One might find that foster kids are getting into foster families where every kid in that family – foster kid and biological kid – are expected to have post secondary education, and it affects them dramatically financially,” Pritzker said, adding later that the ABC Family show is a strong step toward changing the image of foster care.

“I think having someone like Disney ABC behind them, is extremely empowering for foster families,” she said.

There is also an upside for the network. If American audiences embrace the show, similar to how they have embraced ABC’s “Modern Family,” they will be looking at another lucrative television property. 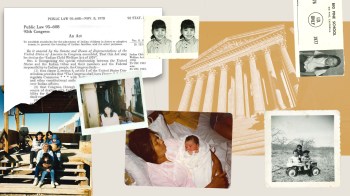