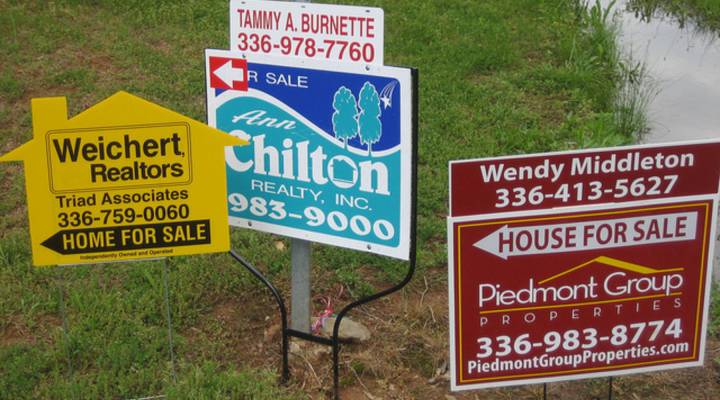 About face on the home front: Interest rates spike

Many economists say the housing uptick is solid and could give the recovery a needed boost. But some urge caution. Images_of_Money / Creative Commons
Marketplace Whiteboard®

About face on the home front: Interest rates spike

Many economists say the housing uptick is solid and could give the recovery a needed boost. But some urge caution. Images_of_Money / Creative Commons

This week’s news from Case Shiller that home prices rose 1.1 percent in March was just the cherry on the sundae. Last week, a report from the Commerce Department on new-home sales showed that builders were on pace in April to sell 454,000 homes this year, up 2.3 percent from March and up 29 percent compared to the same month last year. The Commerce Department said the median price of a home sold in April was $271,600, the highest level on government records dating from 1993. Permits for future construction rose to a nearly five-year high, and used homes sales are on a tear, too. The National Association of Realtors said on Wednesday that existing-home sales had advanced 0.6 percent to an annual rate of 4.97 million units, the highest level since November 2009.

And then the bond market happened.

You remember Ben Bernanke held a press conference last week? OK, maybe you weren’t paying attention. He didn’t seem to say much — just that if the economy looked like it was improving, then he’d scale back his bond purchases a bit.

Investors hesitated for a moment, and then decided to interpret this as a signal that the economy is about to turn around.

Up to now, investors have been very nervous about the global economy, so they’ve been buying lots of the safest investment out there: U.S. government bonds. But now they’re starting to get more confident. They figure they can start to take a few risks, and that means moving money out of U.S. government bonds and into investments that pay better rates of interest.

What does that mean for U.S. bonds? It means they fall in value. And it means new bonds have to come with a higher interest rate, to compete with those other investments.

This is good news for savers. Not so good for borrowers.

Back to the housing market. What fuels the housing recovery? That’s right, the ability to borrow. One of the biggest things fueling the recovery has been low, low interest rates. But if things continue the way they have the last few days, rates won’t be low for long. The average 30-year mortgage rate spiked yesterday to 4 percent, from 3.75 percent last week. Imagine if you were about to rent a home and the landlord came to tell you that your rent will be 7 percent higher than you thought — that’s what just happened to people in the market to buy a home.

It’s true that at 4 percent, the rate is still comparatively low, but if the trend continues, people will find it hard to borrow, the housing recovery will stall, and with it, the entire U.S. economy.

And then we’ll all be needing a drink.