Michelle Singletary, a personal finance columnist for the Washington Post, joins us to discuss the issue.

So why do so many adult children still live at home?

“A combination of things. People coming out of college, they don’t get the jobs they expect, paying the money that they need or want. Lots of kids are not going to school because it is so expensive. I mean, right now to launch yourself it’s very expensive to get the down payment for the apartment, transportation, and all of the things that you have to do. That’s why a lot of young adults are at home or returning home,” says Singletary.

Singletary says adult children hoping to live on their own should have at least six months’ worth of living expenses saved in an emergency fund while they’re getting situated. That emergency fund would include all that it costs to run their household — rent, mortgage, food, utilities, cell phone bill, student debt repayment, etc. She also says that people should have a “life happens” fund for when things go wrong.

Having an adult child living at home can add financial stress on parents. A recent study from the National Endowment for Financial Education said about a quarter of parents with adult kids living at home go into debt. How can parents cope?

“There’s lots of adults who come home and there’s not a plan. They just come home and they use up their salary. They go out with their friends. They’re still shopping. All of the bad habits that they had out on their own, they bring right back to the house. Parents are afraid to say anything, they don’t charge them rent — that’s when they have trouble and they go into debt because they’re still subsidizing that adult child. I have parents who are paying the cell phone bill of their adult child who has a job. That’s not the situation I’m talking about. If you’ve got a trifling adult child at your house who’s not doing all the right moves, kick them out.”

Singletary says that in this economy there are a lot of adult children living at home and parents shouldn’t feel like they have failed.

“Even if they come back in their 30s and 40s, just look at it as you’re just helping them,” says Singletary. “It’s OK as long as you communicate and have a plan.”

And Singletary has experience with the matter. Her sister, niece and 18-year-old nephew lived with her for about a year. She taught her nephew a tough lesson about how to get on the right path toward great independence.

“[My nephew] didn’t really have a plan. He didn’t know what he wanted to do. So he would get up in the morning and for about an hour or two would look at the want ads and decided that he’d look for a job and didn’t want any jobs,” says Singletary.

Singletary decided to charge him rent to motivate him. After a few months, he seriously started looking for a job and got one. Singletary then started adding up the costs for utilities and food. She started ramping up the costs to simulate what it would be like to live in the real world.

Several of our listeners wrote in seeking help. They include:

To hear Singletary’s advice, click play on the audio player above. 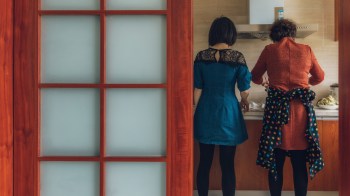