Despite controversy over drones abroad, some see potential positive uses at home

Despite controversy over drones abroad, some see potential positive uses at home

President Obama delivered his most detailed comments yet on the use of drones to kill reputed terrorists yesterday. The use of drones at home and abroad is controversial, and has led several Congressional hearings and sharp debate among law enforcement.

The President confirmed that drone strikes had killed Americans abroad. But he strongly defended the U.S. drone program, saying its use has been important to the war against terrorism.

“I don’t think anyone disputes the program has been ‘successful’ in the sense of reaching targets,” Villasenor says. “The question is the significant amount of collateral damage.”

Despite controversy surrounding drone strikes abroad, many see a long list of potential positives for domestic unmanned aerial vehicles. Villasenor is a supporter.

“Here at home, unmanned aircraft can be used for agricultural spraying, they can be used for surveying, for search and rescue, for spotting hot spots in a wild fire,” he says.

Domestic drone use could become much more commonplace in the next few years. A bill passed in Congress last year requires the Federal Aviation Administration to facilitate widespread use by 2015. 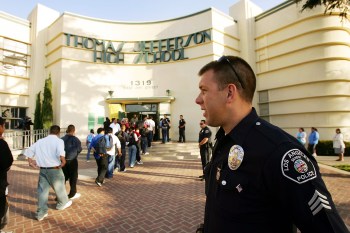