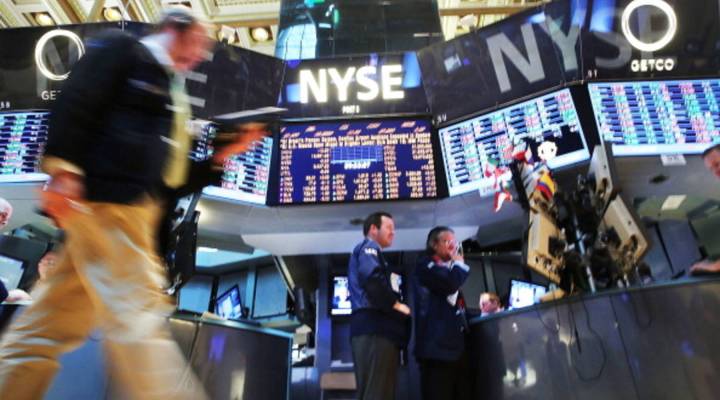 Could Bloomberg lose the trust of Wall Street?

COPY
Traders work on the floor of the New York Stock Exchange on May 6, 2013 in New York City. Spencer Platt/Getty Images

Could Bloomberg lose the trust of Wall Street?

Traders work on the floor of the New York Stock Exchange on May 6, 2013 in New York City. Spencer Platt/Getty Images
Listen Now

Today, Bloomberg — the financial-information company, not the New York mayor who founded it — appointed former IBM CEO Samuel Palmisano to oversee an independent review of privacy and data practices.

Bloomberg has been scrambling since it acknowledged last week that its reporters snooped on bankers through Bloomberg Terminals, which feed financial data and are used for trading. Turns out, Bloomberg reporters could see what see what clients were doing on those terminals.

Bloomberg may be known publically for its news service, but the terminals keep the company in business. Banks and companies lease more than 300,000 Bloomberg terminals, each of which costs about $20,000 a year. Goldman Sachs alone has some 5,000 of them.

“When you go to a big trading floor, you’re looking at half an acre of Bloomberg terminals,” says Max Wolff, a senior analyst at Greencrest Capital.

Wolff says it’s not just the terminals. Between its news service, magazines, data service and other branches of its business, Bloomberg is woven in to the fabric of the finance industry.

“Bloomberg is omnipresent on Wall Street,” he says. “Almost everyone in the financial business has some interaction with some part of Bloomberg on a regular basis.”

That omnipresence is part of why this breach of trust is so serious, says Ken Doctor, media analyst for Outsell. Bloomberg terminals account for around 85 percent of Bloomberg’s revenue.

“It’s the center of the business,” he says. “It raises that question of: ‘Is that terminal as secure as we thought?’”

Big banks are asking that very question. Bloomberg has been doing damage control with dozens of clients. J.P. Morgan Chase has asked Bloomberg to see logs of its reporters’ activities on the terminals, and Citigroup reportedly banned some of its traders from using Bloomberg’s chat service.

“This could just be a blip,” says Doctor, “but it will be a blip that’s going to be remembered for a long time.”

“I’m a nerdy guy. Sometimes I have four different Bloomberg Terminals on at once,” says Stephen Leeb, president of Leeb Group, a money management firm, and author of several books.

Leeb says he loves the Bloomberg terminal and doesn’t plan to drop it but, but this incident is upsetting.

“I’m just uncomfortable with people knowing I’m interested in how the Chinese currency is behaving. Why should anyone else have the right to know that?” he says. “I might go to other internet sites than Bloomberg for information.”

Bloomberg has restricted reporters’ access in the terminals. In a statement today, the company said nothing is more important than its clients’ trust and that it’s doing everything it can to make sure the issue is addressed.