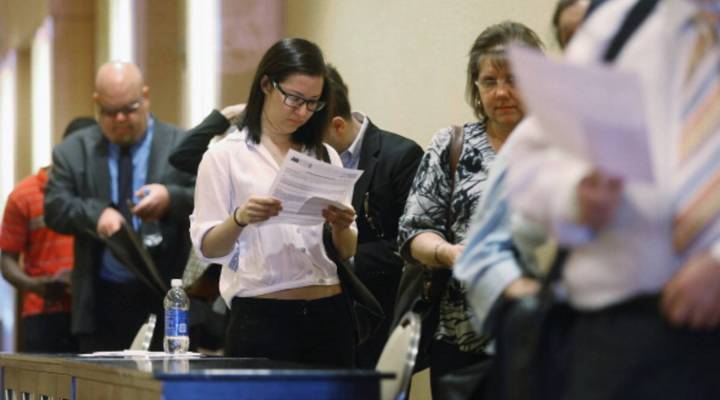 The possible downside to the good jobless claims numbers

COPY
People wait in line to attend a Long Island job fair on May 2, 2013 in Uniondale, N.Y. Mario Tama/Getty Images

The possible downside to the good jobless claims numbers

We appear to have reached another milestone in our climb back from the great recession. The Labor Department said today that the number of weekly jobless claims over the past four weeks is at its lowest level since late 2007. That means fewer Americans are applying for unemployment benefits. In other words, if you have a job, you can breathe a little easier about keeping it.

“You’re actually no more likely to get laid off now than you were before the recession started,” says Heidi Shierholz, a labor market economist at The Economic Policy Institute.

Shierholz says employers have cut most of the fat they can out of payrolls. “They don’t need to lay off anyone, so they’re holding on to their workforce.” Still, she says, consumer demand hasn’t risen fast enough for companies to expand. “The side of the equation that hasn’t picked up yet in the labor market is hiring, hiring is still extremely depressed.”

Government figures show job postings are stagnant and there’s just one job for every three job seekers. “In terms of the overall growth in the economy, we’re wasting this labor resource because we can’t put it to work,” says Ken Goldstein, economist at The Conference Board.

A total of 11.7 million people are out of work in the U.S. and around 37 percent of those are long-term unemployed, meaning they have been jobless for more than six months.

“The really big question is whether the recession has done permanent damage to the labor market,” says Justin Wolfers, professor of economics and public policy at the University of Michigan.

Wolfers says the labor market is recovering very slowly and that slowness could be eroding the quality of the workforce. “Has it knocked people out for so long that people have lost skills and lost hope and that there’s a generation that will never return back to the workforce? We don’t know right now and that’s the great fear among economists.”