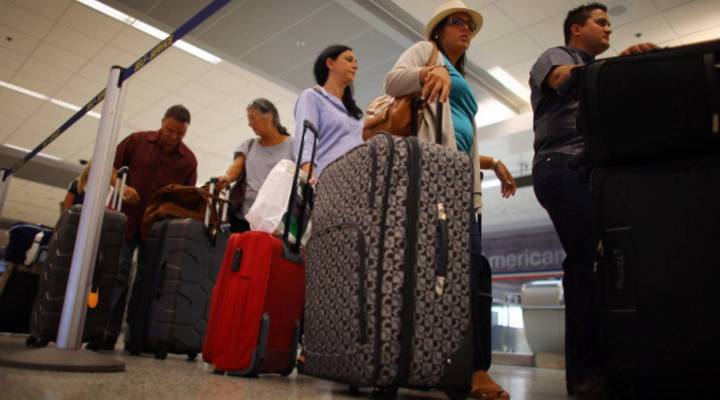 Airline ticket taxes might take off with new proposal

Airline ticket taxes might take off with new proposal

Your travel plans for next year might be getting a little more expensive. As part of his 2014 budget request, President Barack Obama has proposed an increase in the federal taxes and fees on airline tickets. They already amount to around 20 percent of the ticket price.

But plane tickets aren’t the only tax-heavy customer purchases.

“Spirits, beer, cigarettes, gasoline, meals in restaurants and cell phones often have a much higher than usual tax rate on them,” says Richard Morrison at the Tax Foundation.

Uncle Sam slaps a 5.8 percent tax on cell phone bills, and if you live in Nebraska, add 25 percent state tax to your bill. The federal government adds $1 to every pack of cigarettes and $13.50 to every gallon of liquor.

Still, airlines are in a category by themselves, says Henry Harteveldt, a travel industry analyst with Hudson Crossing.

“Airlines as an industry are taxed more than tobacco and alcohol,” he says.

Harteveldt says that does impact the industry. Hudson Crossing’s research shows that half of travelers allow their budgets to dictate where they go, and he adds that leisure destinations like Florida and Las Vegas could be hit especially hard.

“My concern is that this could cause people to either stay home or they’ll not fly,” he says.

But Clifford Winston, an economist and senior fellow at the Brookings Institution, doubts the proposed taxes will change travel habits.

“There would be modest increases there, but I don’t see a huge change in price,” he says. “I don’t think it will be enough to affect travel plans.”

But if you do decide to drive instead of fly, keep this in mind: The federal tax on gas is 18 cents a gallon and, if you fill up in New York, you’ll pay another 50 cents a gallon in taxes. That brings the tax rate to pretty much the same you’d pay to fly.