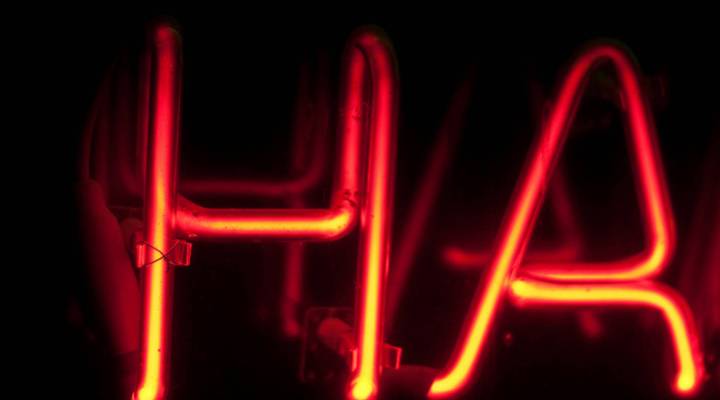 The value of a laugh track

COPY
Can adding canned laughter make a sitcom more popular than one without the assist? Bart Heird / Creative Commons

The value of a laugh track

Can adding canned laughter make a sitcom more popular than one without the assist? Bart Heird / Creative Commons
Listen Now

Next week, network and cable TV channels will debut their fall line-ups in the hope of snagging advertising money. But some story lines are already emerging: Comedy is king.

USA Network has paid more than $1 million an episode to acquire reruns of the ABC hit “Modern Family.” It’s a big bet for a cable channel known for dramas. And it’s a bet on a sitcom that doesn’t have a laugh track. As corny as it may sound, laugh tracks are still valuable to a comedy’s success.

Most TV shows used to be filmed in front of a live audience, so viewers could hear the crowd’s reactions. The laugh track was born in 1950 to mimic that experience or enhance the audience reaction.

“A guy named Charley Douglass invented the machine, it’s kind of like a big pipe organ with pedals and dials,” says Tom Adams, research director for media at IHS Electronics and Media.

Tim Brooks, a TV historian and former network executive, says laugh tracks speak to the fact that we are social animals.

“The laugh track was meant to communicate that sense of community and that theatrical experience,” he says. “People enjoyed shows more where there was some laughter going on.”

Brooks says laugh tracks went a little bit off the rails in the ’60s and ’70s.

“One would be loud and the next would be louder, it was very annoying and distracting,” he says. Brooks points to some of the later episodes of “Happy Days” as an example. He says laugh tracks fell out of vogue for a time after that, but soon found their way back in to the business.

If you think laugh tracks and live audiences are old fashioned, you have only to look at the top rated comedies right now, Brooks adds. “Two And A Half Men” and “The Big Bang Theory” both have live audiences (and edit their laughs). There are, of course, hit comedies that don’t use laugh tracks or studio audiences. Brooks says those are typically comedies that have more complicated plots and subtler humor, like “Arrested Development,” “Modern Family” or “The Office.”

But even for those shows, people crave that community experience, and networks are looking at different ways to create it. To that end, ABC has developed the Social Soundtracker app (which will debut in the next few weeks) where viewers can share their reactions live though Facebook.

People using the app hear a mix of the reactions of fellow-watchers — kind of an app-track, if you will.

TV historian Tim Brooks says laugh tracks will stick around in some form or another, because we do want that sense of community and togetherness, even if we just want to be alone with our TVs.