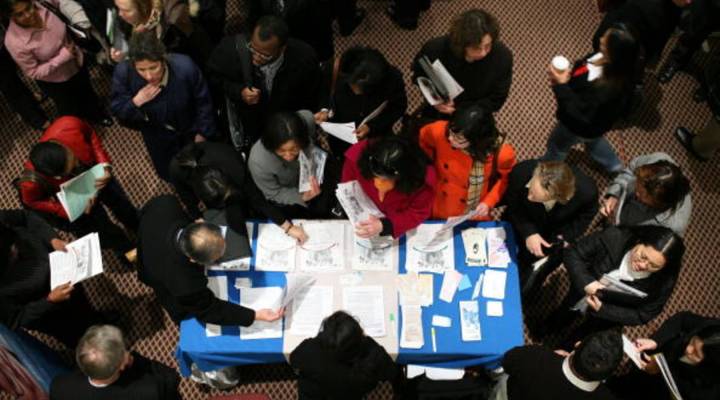 This week in personal finance

COPY
There is one anomalous data point in the overall job-market recovery: wages. Above, job seekers in San Francisco get information on openings. Justin Sullivan/Getty Images

This week in personal finance

There is one anomalous data point in the overall job-market recovery: wages. Above, job seekers in San Francisco get information on openings. Justin Sullivan/Getty Images
Listen Now

What’s going on in the world of personal finance this week? Unemployment numbers came out on Friday morning. The government said we gained 165,000 jobs in April and that the unemployment rate is the lowest it’s been since 2008.

That sounds like great news, but these numbers shift so much. Is it good news?

It is good news — for now. Still, most of the jobs that were added were from lower-income fields — like retail and restaurant work. Also, the numbers do shift. In fact, the numbers for March showed that 88,000 jobs had been added — but it was revised this week up to 138,000.  Revisions usually happen — the data is invariably wrong — but thankfully this time the revision is positive.

What does this say about the long term unemployed?

It’s good news for the long-term unemployed. But there are still 11.5 million unemployed Americans. It’s getting slightly better, but there is a worry that some of the cuts due to the sequester might slow down job growth and might worsen long-term unemployment.

Another interesting development this week came from the Consumer Financial Protection Bureau about the Anti-Housewife Rule. What is that rule and why was it overturned?

The Anti-Housewife Rule had been put in place after the financial crash as part of an effort to rein in some of the wild credit spending that had been going on before the crash. Basically the rule said that a credit card issuer had to look at someone’s personal income as opposed to their household income. For couples where one partner was working and another was staying at home, they wouldn’t have any direct income and in many cases couldn’t get a credit card. It affected an estimated 60 million people. But problems arose from the rule, which affected military spouses and people in abusive relationships, among others. So it was overturned.