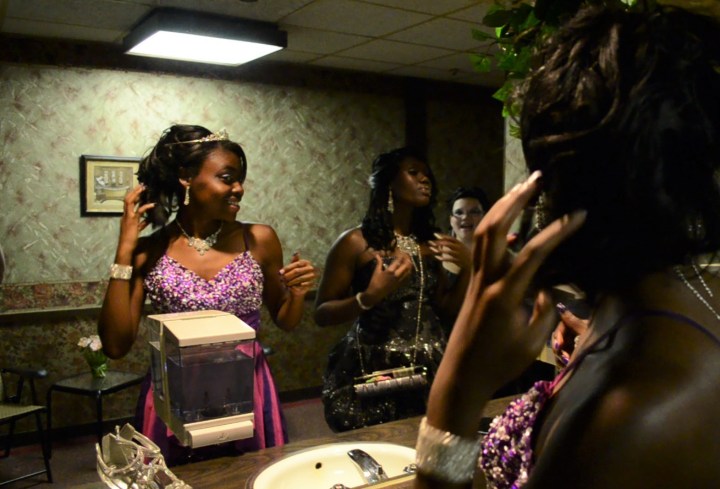 Darrick Wilson has decided he wants to go to prom. Only problem? It starts in about six hours, and he has nothing to wear.

As soon as school’s out, staffer Jami Luggen drives Darrick and his date to Sears. On the way, they order their $20 tickets on the phone.

“I will pay for them either tonight or when I get back,” Luggen tells Darrick.

When they get to the store, they make a bee-line for the men’s section. Darrick spots a purple dress shirt. Luggen finds a pair of brown slacks on sale.

“Ah, perfect,” Luggen says as they head to the dressing room.

Luggen is the resource coordinator at Oyler School in Cincinnati, Ohio. Most of the kids come from low-income families. She’s in charge of wrangling pretty much anything they need — food, health care, size 17 dress shirt.

“Anything it takes to get the job done,” she says. “You want to do the same thing for them that you do for your own kids.”

Passion, who’s 16, steps out of the dressing room with a beige and white strapless dress, revealing a pregnant belly. She and Darrick are good friends. To match her dress, he trades in the purple shirt for a cream-colored one with a brown tie.

“I think you guys will look great together,” Luggen says.

She covers the $150 for the whole ensemble. They’ll work it off helping her with the after-school program.

Oyler hasn’t been doing prom all that long. What had been a K-8 school in Cincinnati’s Lower Price Hill added the upper grades seven years ago to try to stop a dropout epidemic in the neighborhood. Building a culture of graduates meant adding all the trappings of high school. The first prom was in the gym with a borrowed boom box. The students requested a prom, says principal Craig Hockenberry.

“They asked for it, but I don’t think they knew exactly what it was,” he says. “They just heard other high schools had it.”

Many of the kids’ parents and grandparents never went to high school, he says, “so prom wasn’t really part of their vocabulary.”

Now they’ve got it down. The school shuttles the girls to a local charity that outfits them with gowns, shoes and jewelry. The event is in a banquet hall with a dance floor and buffet. As the couples arrive, they get the red carpet treatment.

“It’s like they’ve been transformed into this environment of, you know, you’re just like everybody else,” says assistant principal Amy Woods.

Inside, it’s just like any prom. A couple makes out in a corner. Someone tries to sneak in a flask. And there’s line dance after line dance — the Wobble, the Cha Cha Slide. You’d never guess Darrick Wilson*, living it up in his brand new shirt and pants, almost didn’t come.

“I’m really not a party person,” he says, catching his breath in the lobby, “but I’m really having a lot of fun here today.”

Darrick got kicked out of Oyler in 9th grade for behavior problems. Hockenberry and the basketball coach talked him into coming back. Next year he’s going to the University of Cincinnati’s Clermont College on a full basketball scholarship.

“It feels so good,” he says. “I’m going to graduate on my birthday, so there’s nothing more I could want on that day, just to graduate and be able to get my diploma.”

As the dance winds down, Hockenberry takes the stage. “I want to remind you all about being safe when you leave here tonight,” he tells the kids over the PA system. “Make sure you make the right decisions and I will be at the after party. I heard where it is.”

The kids howl in protest. With graduation in a few weeks, Hockenberry knows he doesn’t have much longer to watch over these kids.

*Correction: An earlier version of this story misspelled Darrick Wilson’s name. The text has been corrected.