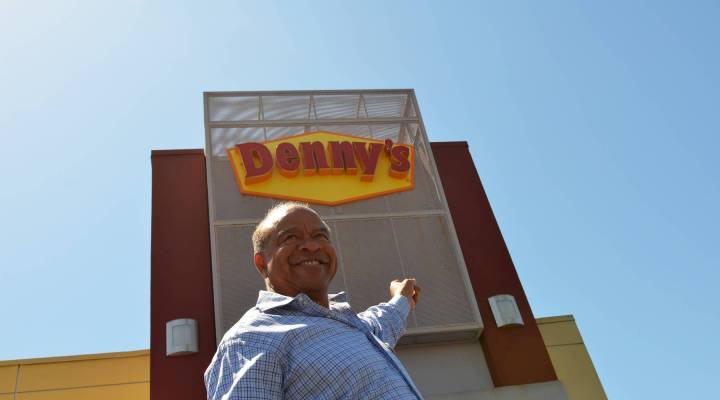 COPY
Ronald Smothers in front of Denny's on Crenshaw Blvd in Los Angeles, Ca.  He has owned and operated this franchise store for seven years. John Ketchum/Marketplace

Ronald Smothers in front of Denny's on Crenshaw Blvd in Los Angeles, Ca.  He has owned and operated this franchise store for seven years. John Ketchum/Marketplace
Listen Now

Growing up, all Ronald Smothers ever wanted was to own his own business. In the mid-’70s, armed with a degree from UCLA, he chose a career in franchise restaurants, opening a Burger King in Los Angeles’ Crenshaw neighborhood. He saw that times were changing and believed fast food was one way to fill a growing gap.

“At that time women really weren’t fully into the workforce like they are today, but they were starting to get in,” said Smothers. “And you could feel that once they got in, they weren’t going to be preparing those meals at home like I was accustomed to. They were going to come home tired as well.”

His instincts paid off and in 2006, Smothers added a Denny’s in Crenshaw to his holdings.

“I would have to say that it was a good trip,” Smothers said. “The money was pretty good.”

Ronald Smothers, who is African-American, was an early success, but by the turn of this century, the franchising industry realized that he was a rarity.

In 2006, the IFA formed MinorityFran, an institute which sought to connect would-be minority entrepreneurs with businesses that were looking to recruit. The idea was that it would be good for everybody, offering businesses entry into new neighborhoods and minorities a way to build wealth steadily over time.

“We tend to support individuals or businesses that look like us,” Brewer said. “So why not have those business owners in their communities?”

Rob Bond co-founded the National Minority Franchising Initiative in 2001, with a similar goal. His experiences growing up in “a lily-white area of Louisville, Kentucky” and later, serving in the Navy, left him with the impression that businesses in the U.S. needed to help level the economic playing field. With the help of sponsors like Meineke, Marriott and Papa John’s, which  paid about $5,000 a year to support the endeavor, the NMFI staged informational lectures for minorities across the country and maintained a website that was dedicated to minority franchising. By 2008, Bond’s outreach efforts were largely over.

“When the recession hit, everything changed,” he said. “All of the second-tier franchisors, I think their bottom lines were devastated. They went from a period of trying to aggressively recruit minorities to [trying to] stay afloat themselves.”

The years between 2002 and 2007 saw a slight — but advocates say, significant — jump in the number of minority owned franchises, from 19.3 percent of the total to 20.5 percent.

Joseph McKenna was part of that shift. An African-American with experience in banking and real estate, McKenna bought a Quiznos franchise in 2006, in what he believed to be an inspired location — Midtown Manhattan’s business district.

“[It was] very close to a lot of the high-end investment banks and a lot of lawyers that did the mortgage-backed securities and, literally, two blocks from Bernie Madoff’s headquarters,” McKenna said. “Once Bear Stearns went out, who used to buy close to $2,000 worth of food from me a week, it’s like the whole thing seemed to just drop like a rock.”

Joseph McKenna was wiped out by a recession that was entirely colorblind, but hit minorities particularly hard. A recent Urban Institute report shows the racial wealth gap has widened since the recession. Prior to the downturn, white families had about four times as much wealth — in cash, real estate, retirement accounts — as non-white families. In 2010, whites had about six times more.

Scholars who study the wealth gap say that efforts to bring minorities into franchising are well-intentioned, but fail to acknowledge a Catch-22: in order to create wealth, a person must already have some.

For Karim Webb, who owns two Buffalo Wild Wings franchises in Los Angeles, wealth was never a problem. Webb’s parents and sister own fifteen McDonald’s franchises and, after graduating from Morehouse, he saw no reason to bother with business school.

“You know, when your parents are entrepreneurs, you kind of grow up around the table, and that is your MBA,” he said. Webb applied for financing during the recession and was turned down by banks, but with the help of his business partner, he was able to attract “high net worth individuals” to help invest the $2 million needed for each restaurant.

On a recent Friday, his Baldwin Hills restaurant was packed with people who crowded at the bar to watch a basketball game and families who’d stopped in for dinner. Webb says he’d like to see more minorities in franchising. He’s aware of the racial wealth gap and the difficulties that minorities face when applying for bank loans.

He also thinks they face an additional hurdle — one that occurred to him while he was talking to a corporate counterpart at a Buffalo Wild Wings convention.

Webb says he had “an epiphany” as his colleague explained that he was having trouble finding African-American and Latino managers.

“I was flabbergasted,” Webb said, “because he didn’t realize those people already worked in his restaurant.”

That conversation inspired him to act and Webb now meets regularly with aspiring minority entrepreneurs who have seen his success and seek to emulate it. He invites them to his restaurant and asks them to defend their business plans. He says he’s on the lookout for new talent in which to invest.

“Hopefully in 10 years, I’ll be in a position to diversify my portfolio,” Webb says, “and I’ll be looking for a plethora of opportunities to park some money.” He says that African-Americans who want to follow in his footsteps are exactly the type of people he’s hoping to support.