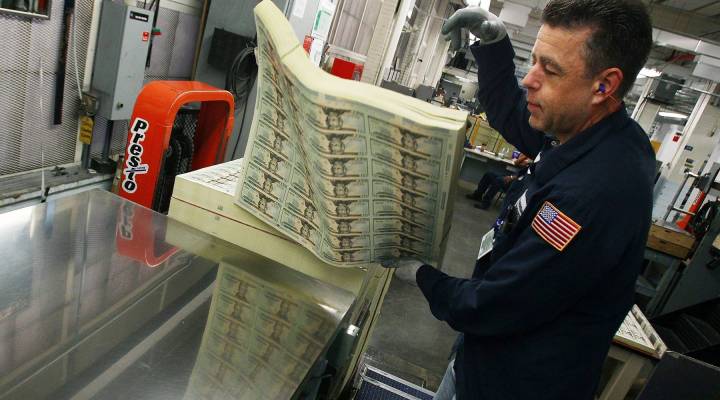 Why inflation can be a good thing

Why inflation can be a good thing

David Gura has a report on Marketplace today making the case for inflation — a little bit of it, anyhow. Economists generally agree that a touch of inflation can have a positive effect. They point out that inflation can erode the cost of debt over time. More importantly, perhaps, it can boost wages and growth. Here’s an example from my book of how this can work.

Imagine a man with 10 children. He moves to a small town in the country that has just one store, which sells stuff that people in the country need, like hammers and tarps and animal feed. The McGivens store has some candy, but not much, because there aren’t that many kids in the town.

The newcomers kids love candy, however, and the first thing they do when they arrive is go exploring the town, to see what they can buy with their pocket money. Rose, the eldest, leads the procession, and it doesn’t take them long to find the McGivens store.

Mr. McGivens: Good heavens! Where did you lot spring from?

Rose: Yes it is, and we’re hungry.

Mr. McGivens: Well, I don’t have much in the way of candy here. I have some Red Strings and some lemon chews, and a big jar of hard candies. What would you like?

Rose: We’ve each got two dollars in pocket money, so that’s $20 altogether. How much are the hard candies?

Mr McGivens thinks for a moment. Usually he charges five cents a candy, because so few people want to buy them. But today the situation has changed. Now there is suddenly a lot more candy money in the town, and only one place to spend it: his shop. An opportunity has presented itself.

Mr. McGivens: The hard candies are eight cents each. The lemon chews are ten cents.

Children (in unison): Thank you!

They march out of the ship, just as Henry Tomkins enters.

Henry Tomkins: I need a new shovel and a bag of fertilizer, please. And I’ll take a dozen of those lemon drops.

Mr. McGivens: That’s $30 for the shovel, $25 for the fertilizer, and a dollar twenty for the candy.

Henry Tomkins: A dollar twenty? They were sixty cents yesterday!

The problem with inflation is that it makes your money worth less. Mr. McGivens store is a micro economy that has been flooded by the children’s candy money. The introduction of their $20 has doubled the price of the candy that Henry Tomkins likes to buy, or in other words his dollar can only buy half the candy it was able to buy the previous day. His dollar, then, has been devalued by 50 percent.

But inflation isn’t all bad. In fact, governments quite like inflation – in moderation. Inflation may devalue existing currencies a little bit, but that can be offset by the fact that there’s a lot more money coming into the system: money to spend, or invest, or build, or even hire more staff. So, in moderation, inflation can help keep people employed.

Take Mr. McGivens. Now that’s he’s making a bit more money from his candy, he has to think about how to use those profits. He could spend the money. Or he could plow it back into his business. Either way, that keeps the money in the system. Say he spends the money on a new tie for himself. That helps the retailer who sells him the tie, plus the tie-makers, and the silk growers: there’s a whole chain reaction through the tie business that can help keep people employed. In plowing the money back into his business, Mr. McGivens could refurbish his store, which would help local lumber suppliers and building workers. Or he could hire someone one day a week, to help him with a stock count. That would give that employee an income, some of which she would likely spend, again sending positive, job-sustaining ripples through Mr. McGivens’ hometown.

Excerpt taken from my book, Man vs Markets, Economics Explained, Plain and Simple. Available most everywhere books are sold.

Inflation: Maybe it’s all in our heads