Why there’s nothing wrong with a 2.5 percent increase in GDP

Why there’s nothing wrong with a 2.5 percent increase in GDP

That would be ONLY 2.5 percent. That seems the upshot of today’s instant analysis — a disappointment. Why the negativity?

When the GDP number came out this morning, the headlines shouted: misses expectations. Less than forecast. Fears of a stalled recovery.

Economic forecaster Joel Naroff explains the dominant frame of reference here is financial markets — folks who bet based on expectations.

“Investors look at the numbers very very differently,” Naroff says. “They’ll look at this number as 2.5 percent and say this is a disappointment, because we could have had above three percent.”

It’s true there are clouds out there: Consumer spending may soon ebb. The sequester’s coming, jobs are soft. But zoom back the frame, and Mark Vitner at Wells Fargo notes 2.5 percent growth beats the recent average.

Ended, as in recovery. In a weak world market. In our very big, post-industrial U.S. economy.

Michael Goldstein teaches finance at Babson College: “We’re the world’s largest economy. How fast could we possibly grow? When you’re huge, you’re going to grow slower. 2.5 percent is probably what you could reasonably expect. We’re not, I mean, we’re not Bangladesh, nothing against Bangladesh.”

He says news organizations tend to overdo the negative. In a not-too-fast, not-too-slow Goldilocks recovery, he says, no one likes to report on room-temperature porridge. 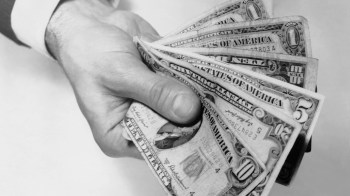 Why we need GDP growth