Turn your castle into a coop: Rent a chicken coop for $250

Turn your castle into a coop: Rent a chicken coop for $250

The first time my neighbors asked me to take care of their chickens while they went away for the weekend, the temperature dropped into the single digits overnight. The hens didn’t freeze like I feared, but by morning their hanging water dispenser was an airborne ice cube.

My attempt to thaw the thing out and refill it was comical. An hour and a few frostbitten fingers later, I got two eggs out of the ordeal and ate the freshest omelet I’ve ever had.

I love connecting with my food as much as the next urban locavore, and fresh eggs really do taste better, but I might not be cut out for four-season chicken farming. Turns out there’s another option: renting.

That’s right… there’s such a thing as Rent-A-Chicken. (This is the company’s actual name.)

“It’s very popular but you have people going into it who’ve never done it,” Suitor says.  “If you plant a radish and the radish doesn’t make it, that’s fine, but you don’t want to be doing that with a baby chicken.  We deliver, set up the coop and answer everything you ever wanted to know about chickens.”

The website BackyardChickens.com has more than 185,000 members (up from 25,000 in 2009) and its owner, Rob Ludlow, points to the growing preference for eggs from chickens that were raised humanely.

“When you collect eggs from your backyard flock, you know exactly how they were treated, fed, and cared for,” he says.

Ludlow adds that raising chickens lets also people take part in the local food movement on a relatively low budget.  Rent-A-Chicken charges $250 for a pair of hens, their food, and a traveling coop that renters keep from early spring through Labor Day.

Suitor has kept chickens all her life.  She got the idea to rent them when Traverse City officials approved an ordinance allowing residents to raise chickens and she heard that some friends paid $2,000.00 for an Amish-built coop.

“We knew that people would be willing to pay for it, but would it fit their lifestyle,” Suitor says. “I think there’s a mindset of, ‘I’d love to have my own farm, raise my own food and be au naturale,’ but it’s hard for people to get that dream. We make it possible to be a micro-farmer for six months.”

Suitor says chickens have a lot of personality, so most renters fall in love with them. If they can’t bear to give the birds back, she’ll sell them for $20 each, coop not included. 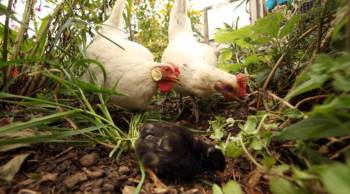